That’s how we feel about Clubhouse. If you haven’t heard of it, it’s the new and *highly-exclusive* members-only social media app that’s currently only available to those who are invited.

And many of those are celebs. At the time of publishing, it had just 3,500 members around the world but that elite crowd included Oprah, Ashton Kutcher, Drake and Jared Leto.

It’s been so long since we queued for a nightclub. Do you actually remember how good it felt to get inside? All that waiting out in the cold, trying to look sober and staring at the VIP line, long-forgotten.

The Clubhouse app is straight out of Silicon Valley and being dubbed ‘the next big thing’ in social, so WTF is it and why is everyone talking about it? 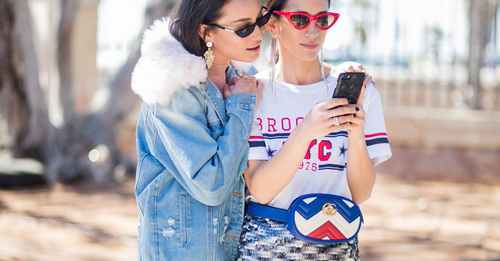 Unlike Facebook, Twitter and Instagram, Clubhouse is about connecting people via audio, only. So, once you’re inside, you can eavesdrop on, or join in with, conversations that are already happening, or start one of your own.

It’s a bit like dropping into the live recording of a podcast, where you can actually raise your hand and ask a question.

To give you an example, this week, the rapper and former child star, Bow Wow, got his name trending on Twitter after sharing the origins of his pop career in a Clubhouse chatroom, revealing how he was discovered by Snoop Dogg at 13 and later signed by Jermaine Dupri.

The funny this is, there’s no audio of the chat available because Clubhouse is a safe space where celebrities can answer questions, lecture and share stories without being recorded.

Ok, so what do we have to do to get an invite? Five months into going live with the app, Clubhouse founders say they’re working on making it available to the public ‘as quickly as possible’.

So that you’re not left out in the cold, GLAMOUR has done a little digging to find out what’s really going on inside Clubhouse.

What exactly is Clubhouse?

Twitter’s hook is words, Instagram is about pictures and Facebook is about, well, faces but Clubhouse is the free social media network forged around audio.

In a year when we connected most over Zoom, Clubhouse is the platform where eye contact, awkward walk-ins, naff backgrounds and dressing up for digital are all forgotten to allow the focus to be solely on conversation.

On the inside, you can see ‘rooms’ of people talking, which you can hop in or out of at any time. You might very well encounter Oprah talking to Ashton and you can stay and listen. You can even ‘raise your hand’ for the speakers to invite you up to contribute.

It means that debates, lectures, performances, book clubs, comedy shows and jamming sessions are all available to listen into for free, like a fly on the wall. The only rule is, you’re not allowed to record anything.

Alternatively, you can start your own conversations with friends or strangers, just like you would at a house party. Remember them?

Right now, not many people. The app is only open to a beta group, meaning they’re keeping things small to test the features and safety.

Of the Clubhouse members we do know, you could be joining musicians Estelle, Drake, 21 Savage and Lupe Fiasco alongside comedians Tiffany Haddish and Kevin Hart. There’s also Hollywood actors like Ashton Kutcher and Jared Leto. Queen of the chat show Oprah is, ofc, on the chat room platform because when she speaks, people listen.

How can I get a Clubhouse invite?

For this, we’ll have to be patient. Each new member is allocated one invite, so if you get invited by an existing member, you can pick one of your friends to join with you. (As if the Rule of Six wasn’t screwing with enough friendships.)

Right now, the club is so small that unless Jared Leto wants to chat to you, it could be sometime before it filters down to our humble UK networks.

Want to take advantage of that stamp duty holiday?

Are you friend shedding? Here’s why our friendships evolve over time…