Fitness+ will launch later this year with a bunch of different types of studio workouts, including cycling, HIIT, treadmill classes, yoga, dance, rowing, and something called mindful cooldown, according to a press release.

There will also be a class called Absolute Beginner that will teach users the basics of movement and working out so they’re ready for the other classes on Fitness+.

One neat feature is that the Apple Fitness+ classes will be synced with your other Apple devices. So if you start a workout on your iPad or iPhone, it will also automatically start on your Watch as well. If you’re an Apple Music subscriber, you can opt to play your own music while you exercise.

Apple announced today that it is entering the streaming workout game with Apple Fitness+, a platform for workout videos that will sync with heart rate, activity rings, and other information from your Apple Watch. 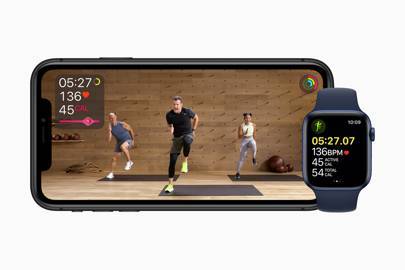 You do need to own an Apple Watch (series 3 or later) and/or an iPhone (6s or later, or SE) to participate in Apple Fitness+ classes. But you can use whatever other workout equipment you’d like-and many of the classes will not need any equipment at all, the press release says. With an Apple Watch, the company says you can expect to be able to subscribe to Fitness+ by the end of the year for $9.99 (£7.69) per month or $79 (£60.82) per year. You’ll get a month free to try it out, and you can share it with up to five people in your family, the company says.

During the workout, you’ll see metrics from your Apple Watch (like heart rate, calories burned, and time), as well as the activity rings you’re already used to, displayed within the video for the workout class. You can also turn on the optional Burn Bar to see how your stats compare to those of others who’ve taken the workout, if you’re the competitive type. There’s also a sharing feature so you can connect with others and share when you complete a workout.

The launch comes after many people in the U.S. have shifted to home workouts thanks to the COVID-19 pandemic, including possibly purchasing high-priced equipment like a Peloton or subscribing to premium streaming workout platforms, such as Fitbit Premium, Nike Training Club Premium, Obe Fitness, and many others. It remains to be seen exactly how well Fitness+ will stack up against those long-standing options, but there’s never been a better time to experiment with.

These are your definitive social rules for the new normal