Collaborating with photographer Terry O’Neill, the capsule collection is a simple monochrome series featuring some of O’Neill’s most iconic Brigitte Bardot photographs.

She’s the LA-based designer known for her grunge girl, rock’n’roll aesthetic, but her latest collection may be her coolest so far.

But in a tragic turn of events, the photographer passed away over the weekend on November 16th, mere days before the collection’s launch.

Determined to pay tribute to his legacy, Anine has ensured that a portion of the proceeds from this collection will be donated to The Bobby Moore Fund via Cancer Research UK, an organization chosen by Terry O’Neill and his team.

Arriving in London this week to celebrate the collection, we caught up with Anine to discuss the launch…

Does the collection have an added sense of poignancy given Terry’s tragic passing over the weekend?

Most definitely, for me, it’s a way to celebrate Terry’s career and work throughout his life. I’m extremely honoured to have not only been given the chance to meet Terry but to be able to work so closely with Terry’s team and develop a friendship.

In loving memory of Terry, a portion of the proceeds from this collection will be donated to The Bobby Moore Fund via Cancer Research UK, an organisation chosen by Terry O’Neill and his team. I feel it’s so important to honour his work and pay tribute to what an incredible man he was.

Have you always loved Terry’s work, and what is it about his photography that speaks to you?

I have always been a big fan of Terry O’Neill, which can be seen throughout the ANINE BING stores worldwide and within my home and office. I have multiple prints and books of his work, and often include his photographs within my mood boards when I’m designing collections. Terry captured the swinging sixties, introduced us to who’s who within the music, fashion and film industry of the time, as well as giving a raw insight into the celebrity culture, all through the form of photography.

It’s a beautifully low-key, monochromatic collection – what sort of girl do you see wearing the pieces?

She is a modern woman when I’m designing I always want to make sure that we are creating the luxury core essentials of her wardrobe to grow with her throughout her life. With this collection, I wanted to celebrate Terry’s work and also bring him to the forefront as one of my main inspiration since launching the brand as a way to say thank you to him.

This happened earlier this year to everyone and anyone with even the faintest interest in fashion as Dior staged their mega showcase at the V&A. And considering the resounding success of that fashion extravaganza, we’re predicting mega things for the next in line…

Whether or not you’re a ‘museum person’, every now and then an exhibition comes along that is so often spoken about within your circle of friends that you can’t help but be tempted.

So which fashion house will we be queuing up to take a deep dive into next year? Why, Prada, of course.

Staging its ‘Front and Back’ exhibition at the Design Museum in London, we’ll all be given a front row view into Miuccia Prada’s wildly unique story.

“Different sectors will reflect the idea of front and back, conveying both the surface of fashion and at the same time the creative and industrial infrastructure on which it depends.”

Joining the family business in the mid-70s, Miuccia not only turned Prada into one of the most successful fashion houses in the world but also transformed the landscape of both style and culture. 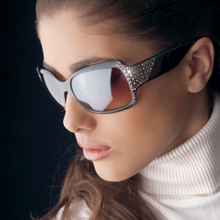 Sunglasses this season are still huge. The main thing – to find your limit