Recently, Keanu Reeves reportedly revealed in an interview that he’s a “lonely guy.” “I don’t have anyone in my life,” he added, “but if it does occur, I would respect and love the other person. Hopefully, it’ll happen for me.”

The story quickly went viral because, duh. Keanu Reeves, a national and cinematic treasure, is lonely? If that’s true, I volunteer as tribute to keep him company. I’d cook him chocolate chip cookies while we heart-to-heart about, like, where our souls go when we die. We’d have a really nice time, I think.

Others on social media feel the same way:

It’s heartbreaking to think Reeves is lonely because, like Tom Hanks and Chris Evans, he’s on a very short list of universally beloved men. He’s found a respectful way to pose with female fans for photos.

He’s an ally to his female costars: According to Winona Ryder, Reeves refused to go along with director Francis Ford Coppola’s demand that the male actors on the set of Dracula shout at Ryder until she cried. In fact, there are multiple articles with the headline “Proof That Keanu Reeves Is the Nicest Guy in Hollywood,” which is enough proof for me that he’s the nicest guy in Hollywood. His work is so iconic that a hip NYC theater hosted a retrospective of his films this summer; in April, Glasgow threw a KeanuCon festival. Even Sandy Bullock, literally Miss Congeniality, has a crush on him. 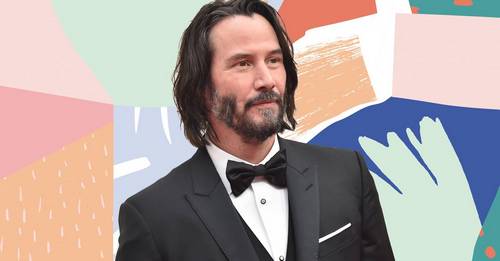 The good news: His rep told Huffington Post the interview was “fabricated.” Thank God Reeves is doing just fine, but the story did lead to an interesting discussion on social media – and among the Glamour team – about his allure. When I dropped the article into Slack, a conversation with my coworkers about how much we love Reeves quickly took off.

Khaliha Hawkins pointed to a lesser-known Reeves film, 1995’s A Walk in the Clouds, as proof of his versatility as an actor. “Keanu is known for his action roles, but he’s always been a rom-com star in my mind,” she said. “A Walk in the Clouds is full of drama and rom-com tropes, so this movie has it all.”

Samantha Leach said she keeps seeing nostalgic photos of Reeves in her Instagram feed, to her delight. “If you’re deep down the rabbit hole of ’90s nostalgia Instagram like I am, photos of Keanu Reeves and River Phoenix around the time of My Own Private Idaho pop up a lot,” she told me. “The smoulder that guy gives off as a ’90s indie star is unreal, like, c’mon. More important, whenever he’s pictured with River Phoenix, he looks so protective of him. River was struggling with addiction by that point, and with every pose Keanu looks like he’s trying to convey ‘Let me save you, River’ through his eyes. It’s how much he cares that truly makes him sexy.”

For Kim Fusaro, the love for Reeves started early and hasn’t wavered. “I saw Keanu in Point Break in the theatre because my friend’s mom escorted us, two preteens, to the counter and cleared us for tickets. It was my first in-the-theatre rated-R movie,” she said. “A decade later I went with the same friend to see Keanu’s band, Dogstar, at a shitty Providence bar, another venue that we definitely weren’t old enough to be in. He was worth bending the rules and breaking the law for.”

I didn’t know Reeves had a band, but it only adds to his charm. That surprising side of Reeves is what Christopher Rosa likes too. “He’s a great actor – and so, so hot – but my love for him is rooted in something else entirely: conspiracy theories,” Rosa said. “There are so many wild rumours about Reeves on the Internet, and they’re either all true or all complete B.S. Like this one about how he paid for a stranger’s kidney transplant. Or when everyone was convinced he saved dozens of cats from euthanasia. And there’s the old folklore that he drives a Honda and lives in a normal apartment despite having millions. We do know he takes the subway, so perhaps that last one is true. Regardless, the Internet is out here posting theories about him like he’s a Game of Thrones character, and I’m here for it.”

Ana Colón insisted we all watch BuzzFeed’s puppy interview with Reeves, which she described as “a goddamn delight.” “It’s particularly noteworthy because (1) he was able to stay more focused than other participants and (2) his answers range from adorably punny to deep and sincere. Gravity helps him stay down-to-earth, for example; he’s a self-identified Edward de Verean, so he’d like to time-travel back to the time of Shakespeare to see who’s really responsible for those contributions to literature. I ask you: Whomst?”

I could write 3,000 more words about Reeves’ greatness – his chill reaction to the “sad Keanu” memes; the movie Keanu, in which he voices an adorable kitten; the time he reportedly found an intruder in his library and calmly talked to her until the cops arrived; everything about the John Wick movies.

But I’ll end this ode by praising Reeves’ recent memorable appearance as a highly fictionalised version of himself in Always Be My Maybe, Ali Wong’s Netflix romantic comedy. He was Wong and director Nahnatchka Khan’s first choice for the part – a love interest for Wong’s character – but even they were surprised by how game he was to do it. “We all thought it was going to be impossible to get him,” Randall Park, who also stars in the movie, told Vulture. “What was the likelihood of him being available, and then also him being willing to play himself?”

The scenes are wild to watch. He is “Keanu Reeves,” sure, but this character is more of a parody of what a fan might think weird, out-of-touch celebrities are like than anything grounded in reality. He’s the kind of guy who goes to a fancy restaurant and orders dishes that “play with the concept of time.” When a woman tells “Keanu Reeves” she’s starstruck, he replies, “The only stars that matter are the ones you see when you dream.” This version of Reeves is an asshole – another reason it’s clearly fiction – but he’s still fascinating. You want to be around him, even if his idea of a fun game night is deeply concerning.

I truly think this will go down as one of his best roles. The part lets Reeves show a comedic side we rarely get to see, while playing on the mysterious allure of his personal life and celebrity. It’s brilliantly written, and he’s brilliant in it.

With news that Matrix 4 is officially a go – and with Keanu Reeves reprising the lead role, no less – we thought now was as good time as ever to remind you that Reeves is the best. Our original post, which was published in June 2019, can be found below.

5 Ways the Wedding Industry Will Change After the Coronavirus Pandemic