Indulge in NOLA’s greatest dishes and drinks when you’re in town for the legendary music festival’s 50th birthday. 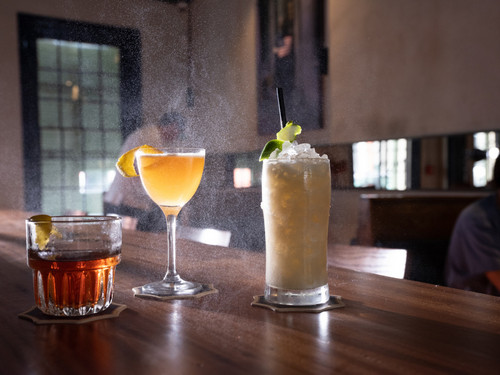 The Old Fashioned, Sidecar and Greena Colada at Longway Tavern.

When it was announced that Widespread Panic would be replacing the Rolling Stones in headlining this year’s New Orleans Jazz and Heritage Festival, the news was met with, well, widespread panic…then, “Huh?” Particularly for those who stood hours in lines for $150 tickets. Fleetwood Mac, the immediate fill-in, similarly cancelled (“Stevie Nicks Has a Cold”).

News flash: Get over it, people, considering the embarrassment of riches the festival – and the city’s exploding culinary scene–provides.

Kicking off Friday April 26 through May 5 over two extended weekends, Jazz Fest turned 50 this year. And the bonafide local jazz, blues, Zydeco, gospel, and Mardi Gras Indian acts – not to mention all that sumptuous, crawfish-happy vendor fare – will be rising to the highest standards.

By the way, the lineup of over 500 performers this year isn’t exactly chump change. It includes marquee names as varied as Pitbull and Tom Jones, Van Morrison and Katy Perry, Bonnie Raitt and Jimmy Buffett, Gladys Knight and Dave Matthews, John Fogerty and Mavis Staples. And on May 4, Diana Ross will be making her Jazz Fest debut. (The Lady does sing the blues, you know.)

As the two-weekend rollout consumes just six days, those off days provide a terrific opportunity to rove New Orleans’s tried-and-true and recently invigorated corridors for restaurant-and-bar-hopping, made all the more fun when utilizing the city’s new bicycle-share program (making parking and navigating a breeze). Suck in all that architectural majesty and that fragrant air, cloaked in jasmine, magnolias, and orange blossoms.

The choices of pit stops are slightly anemic, however, directly surrounding the Jazz Fest grounds. Save some bread and hit them before entering. You can hardly go wrong at Liuzza’s by the Tracks, the ground zero for time-held signature dishes like BBQ shrimp po-boys and fried seafood platters.

There’s also Sante Fe, a fine Mexican cantina with a sidewalk patio sprawl, which is the place to take cover over Mezcal as a storm rolls in; Café Degas, one of the best French cuisine brunch spots in town; and nearby Pal’s, an old school shotgun of a neighborhood bar, which often has pop-up fare on its side (check out the bathroom, a shrine to vintage Playboy magazines).

But let’s make it easy visiting the Big Easy for Jazz Fest. With over 1,000 eateries and 400 bars, here is your insider cheat sheet of the new and worthy and a sprinkling of reinvigorated classics – quite a number James Beard Awards-heralded, and a few wow-inducers in the outer limits worth the search.

There is nothing too Fancy Pants here, selected for exquisite regional comfort-food offerings, freshness, and local color. Note too that the French Quarter – the bastion of old-school French-Creole temples – now calls home some of the most inspired freshman dining spots. And nearly all the selected bars serve food or host weekly food trucks and surprising pop-ups.

It may be a cliché, but shout it loud: “Laissez le bon temps rouler!”

Jewel of the South

Look hard for this French Quarter bar, housed in a circa-1830s cottage, just opened by James Beard-winning mixologist Chris Hannah and rummy-expert Nick Detrich. Featuring an ancient copper-top bar and a tavern-like setting, it is home of the Brandy Crusta (a Cognac drink with a sugared rim), classic cocktail lovers will swoon.

Why go have charbroiled burgers and loaded baked potatoes when you can get that…anywhere? Just go, man, go. You can smell the fire from blocks away, luring both tourists and locals, for decades, particularly for what may be the strongest rum-based drink in the city: the lethal Monsoon.

Stumble out onto the French Quarter’s live oak tree-lined Esplanade Avenue with a pitcher-sized “go-cup” and see things in a very different light. For it is DARK inside there.

Queen Trini Lisa’s “West Indies Wednesdays” popup is a must. Check for crawfish boil nights too through the fest dates.

This lively Riverbend-area satellite to the classic streetcar-fronting The Delachaise has earned its own yummy identity. Locals go for the sizable small plates like the overflowing tin of goose-fat fries, grilled calamari, cauliflower hot wings, and Bavette steak brushetta. The lamb burger is sublime and the wine list is one of the most respected and reasonable in town, featuring terrific happy hour bottle prices.

There’s a full bar, a jungle of a front patio, and, new this month, a lattice-work back patio for spreading out. Chais Delachaise is an insider favorite and a date haven for all those nearby co-eds at Tulane and Loyola.

The sacred and profane kneel together at this balmy cocktail–and–fine dining enclave, nestled in the downtown Faubourg-Marigny corridor inside a converted historic rectory within the newly christened Hotel Peter and Paul.

Exorcise your demons in style alongside the locals who have embraced this “Chateau Marmont of the South,” featuring reasonably priced (for a hotel) margaritas and daiquiris.

There is a mirage to this 10-year-old stalwart on Uptown’s Magazine Street. From the sidewalk it’s a quaint century-old residential cottage with front porch seating. Inside it’s a gorgeously subtle ‘60s-era den of sorts, furnished and designed with Mid-century Modern in mind. Low-slung sofas, walnut and stone veneer.

The place personifies cool. And a turntable that mostly spins music from a louche past: think early Stones, Nat King Cole, Lou Reed, Chet Baker. Get lost in it, as you eat some of the best small plate offerings the city provides. James Beard finalist Jon Harris owns fine-dining Lilette next door, but this is where you’d find him after work.

Perhaps one of the best-looking crowds in town, and we mean that in a good way. The burger is among the top five best in town and the drinks are shaken by absolute pros. At happy hour, order an Old Fashioned or three. 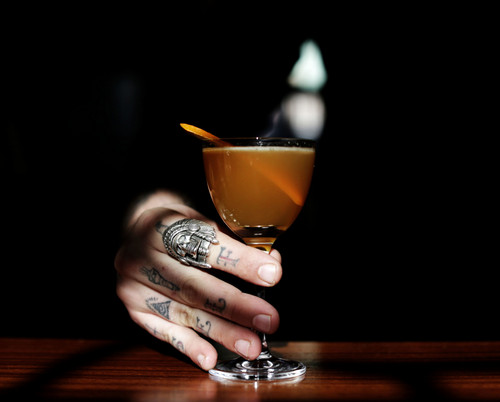 This unpretentious, nationally lauded bar and café hits the Bull’s Eye for locals long seeking an un-touristy after-work spot to wind down and maybe hook up in the heart of the French Quarter just off Bourbon Street.

Grab a table in the bustling historic courtyard and hit the Waygu steak sandwich with some hopping calamari, or pull up a bar stool and order a whiskey with a $1 Miller High Life pony.

Take a four-top or take it out at this happy-happy, tres-casual café co-owned by white tablecloth guy Tory McPhail, the executive chef of Commander’s Palace.

Think Saltines and fresh biscuits. Yes, there is whiskey, and alcohol-infused lemonade drinks. Have a cocktail and take it to nearby Audubon Park with a blanket and a Lothario plan.

This cinematic 35-seat vintage-Cuban bar in the French Quarter transports ex-pats and locals to circa-1950s Havana, with its classic daiquiri drinks and authentic Castro-pub food.

Brought to you by the man who made Arnaud’s French 75 – and its namesake gin-Champagne drink – famous. Its more established cousin Cane and Table provides a similar Rick’s Café vibe, as well as a romantic as hell courtyard.

At the farthest reaches of Bywater (“Williamsburg of the South”), this Portugese-inspired hot spot–noted for its fishy-fish delectables served out of tins–tries hard to be elusive.

Within walking distance from the Jazz Fest fairgrounds on groovy Caribbean-neighborhood Bayou Road, this fledgling speakeasy features whiskeys and cigars, with all those dark wood and leather banquette trappings.

If cigar smoke raises your hackle there’s a backyard patio, too. Closed Mondays and Tuesdays.

An underappreciated corner hospice far Uptown by the wharves on the Mississippi-hugging Tchoupitoulas Street, this expansive corner shanty has it all: stupidly cheap drinks (with fresh-squeezed juices), fancy cigars, a backroom billiards table, an umbrella-shrouded patio with swings, and robust traditional jazz nightly (after 9 p.m.).

Never a cover charge, the romantic “Two Chiefs” may be the cheapest, most participatory date you’ll ever go on. Opens nightly at 5. Our favorite food truck comes round twice a week: Taceaux Loceaux; order the shrimp-taco Shore Thing or the hardshell beef Chubster.

No city has so many neighborhood bars, most of which have food-truck nights. Traversing the city, our favorites include Chart Room (French Quarter), The Kingpin (Uptown), 45 Tchoup (Uptown), Sidney’s Saloon (Treme), Cosimos (French Quarter), Pete’s Out in the Cold and Parasol’s (both Irish Channel), and Buffa’s (Marigny).