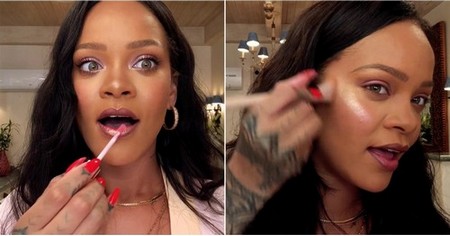 “Hi, I am going to do my makeup for you guys,” Rihanna says after clumsily attempting several other introductions to her makeup tutorial. In conjunction with her Vogue June 2018 cover, the 30-year-old singer and makeup mogul shared a 10-minute going-out makeup tutorial that is charming as hell. She of course managed to tease a new Fenty Beauty Killawatt Highlighter Duo in the process.

Rihanna then jumped right into her elaborate, yet somehow streamlined, routine. “I can do my makeup in 10 minutes or 10 hours it feels like sometimes – depends on what kind of day you’re having,” she says. After applying and blending her Pro Filt’r Soft Matte Longwear Foundation, Rihanna contours with her Match Stix Matte Skinstick in Mocha. “It’s very important to contour your face for your face, not the way you see on every YouTube tutorial,” she says. “I learned how to contour when I gained weight, believe it or not. That’s when it comes in real handy.”

Rihanna’s tip: she first warms her concealer on her hand before applying the stick directly to her face. So now, we will dutifully do the same. “Everybody knows concealer is made for hiding bags, dark circles, and hangovers . . . and bad decisions,” she adds. She then sets her makeup with her Invisimatte Blotting Powder, which she says she never leaves home without. Rihanna then adds a little bit of “eyelid drama” with the aforementioned highlighter in Beach Please, which will be released on May 21. Next, she admittedly gets a little “carried away” with highlighter – and several different shades at that.

After applying some Cosmic Gloss and showing off her impending Savage lingerie line, Rihanna declares, “I feel kinda cute.” We’d sure say so!