Something tells me we’re not the only ones who get excited over beans and rice. Do you? Rarely a week goes by that we don’t have beans of some sort or another, and my mother’s chili beans with rice are a staple around here.

My father found a recipe in our local grocery store (Raley’s) circular for a Cajun red beans and rice using smoked pork shanks. Given my dad’s love affair with all things pork, he couldn’t wait to make it. Traditional Louisiana red beans and rice also uses Andouille sausage which we did not add, but you could if you wanted. There was plenty of flavor, and plenty of meat, with the smoked shanks.

If you have access to ham hocks and not shanks, you may want to make up the difference in meat (hocks have much less meat) with sausage. Just take 1/2 pound of Andouille sausage, slice, brown first before adding to the beans with the ham shanks. If you do not eat pork, you might try making this with smoked turkey sausage, in which case I would replace some of the water with chicken stock. 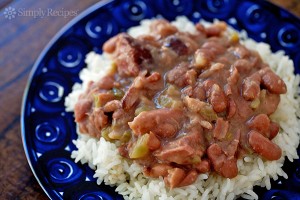 *If you don’t have access to packaged seasoning, just skip it and add some thyme (fresh or dried), a bay leaf (in with the beans and shanks in step 2), and a little paprika
**We used a combo of Chipotle Tabasco sauce and regular Tabasco, could also use cayenne pepper

1 Place dried beans in a large bowl and cover them with cold water by a couple of inches. Let soak for 8 hours or overnight. (You can quick soak them by putting them in a bowl and pouring boiling water over them, covering them by 2 inches, then letting them soak for two hours.) Drain.

2 Place beans, ham shanks, garlic, chopped onion, and water in a large (8-quart) pot and bring to a boil. Reduce to a simmer and cover, simmer for 1 1/2 hours or until beans are tender.

3 Remove ham shanks from the pot to a dish. Let cool slightly then shred the meat away from the bones. Return the meat back to the pot. Add the celery, bell peppers, Worcestershire and seasonings. Cover and cook for another hour or until the mixture gets thick. Season to taste with Tabasco sauce, salt and pepper.