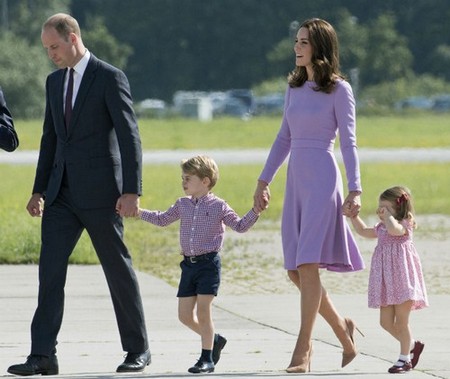 Fresh off her second appearance since announcing her pregnancy, (where she debuted a stylish, new short hairdo), Catherine, the Duchess of Cambridge and her husband, Prince William, have confirmed the due date of their third child via an official statement from Kensington Palace.

“Their Royal Highnesses The Duke and Duchess of Cambridge are delighted to confirm they are expecting a baby in April,” the statement read.

We can expect to see a slew of stylish maternity looks from the Duchess, especially when she embarks on an official royal tour of Norway and Sweden come 2018, where we’re bound to see her baby bump in one look after another. Considering the down-to-earth royal loves to recycle some of her favorite wears, it’s safe to assume we might even see some of her great maternity looks from her previous pregnancies as she steps out for her various appearances.

Kate and William announced the news early on in their pregnancy, due to Kate’s extreme morning sickness, a condition known as hyperemesis gravidarum. Although she stayed out of the spotlight and even missed Prince George’s first day of school because she was feeling ill, those days thankfully seem to be behind her.

Just yesterday she stepped out unannounced at a promotional appearance for Paddington 2 alongside Prince William and Prince Harry, where she opted for a feminine pink frock by designer Orla Kiely. The color of her dress had many speculating regarding the sex of the baby…and we’re sure the British tabloids will have a field day attempting to guess whether Kate and Wills are having a boy or girl as her pregnancy progresses.

The Reasons Beyoncé Returns To Vegan Diet In Preparation For Coachella

How to meet someone when you’re social distancing