Well, Peter Morgan, the creator and screenwriter of The Crown, has dashed our hopes whilst speaking to the Hollywood Reporter.

Peter has unfortunately confirmed that they will not appear in the final season of the show due to his, “20 year-rule,” which he has enforced to make sure that the story is being told from beginning to end. The rule means the life of Princess Diana will be shown in full.

“I just think you get so much more interesting (with time). Meghan and Harry are in the middle of their journey, and I don’t know what their journey is or how it will end,” Peter said when asked about whether the young royal couple would appear in the show.

As we await the premiere of season four of The Crown this winter and the entrance of Princess Diana, played by Emma Corrin, our attention is already shifting towards the big question: will the two final seasons, the fifth and sixth of the Netflix show, feature Meghan Markle and Kate Middleton?

“I sort of have in my head a 20-year rule. That is enough time and enough distance to really understand something, to understand its role, to understand its position, to understand its relevance. Often things that appear absolutely wildly important today are instantly forgotten, and other things have a habit of sticking around and proving to be historically very relevant and long-lasting,” he continued.

Any discussion of the Prince Andrew Epstein scandal being included in the show have also been stopped, as Peter added, “I don’t know where in the scheme of things Prince Andrew or indeed Meghan Markle or Harry will ever appear. We won’t know, and you need time to stop something being journalistic.”

“There’ve been wives that have been married into the Royal Family that have felt unwelcome and that they don’t fit in. So, there are plenty of stories to tell without telling the story of Harry and Meghan.”

The news comes in the same week where the last Princess Diana was announced with Elizabeth Debicki set to overtake the role from Emma Corrin for the two final seasons which will mean the show will cover the death of the People’s Princess.

In the meantime we just can’t wait for season four – is it bad of us to wish away summer?

Remember when Prince Harry and Meghan Markle made their first public appearance as a couple? It was the third day of the 2017 Invictus Games in Toronto when they walked out hand in hand during the wheelchair tennis event, adorable smiles plastered on their faces as the cameras snapped away. All eyes were immediately on Meghan’s casual-chic outfit, and phew, it certainly didn’t disappoint.

She rolled the sleeves of her white Misha Nonoo button-down to the elbows and styled it with distressed Mother jeans, Sarah Flint bow flats, a brown Everlane tote bag, and Finlay Co. sunglasses. Needless to say, the pieces sold out quickly, and waitlists for many of the products she wore ensued. 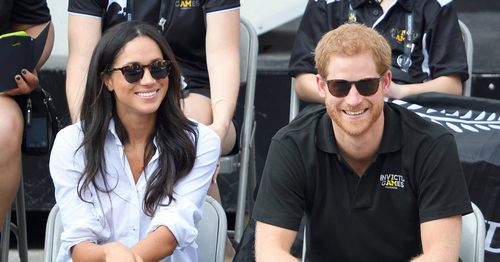 Eagle-eyed royal family fans who tracked down Meghan’s Misha Nonoo shirt online were quick to point out an interesting detail: it was, and still is to this day, called the Husband Shirt. At the time, many assumed it was her cheeky way of indicating her intentions to eventually tie the knot with Harry down the line. But as it turns out, she and Harry were apparently already engaged at that point – despite the fact that they waited until two months after the Invictus Games to officially announce the news.

According to royal reporters Omid Scobie and Carolyn Durand’s new book Finding Freedom: Harry and Meghan and the Making of a Modern Royal Family, Meghan seemingly hinted at their little secret by wearing the Husband Shirt – quite the clever selection, if we do say so ourselves. Plus, Misha is the person who brought Meghan and Harry together in the first place, so it’s a pretty sweet way to say “thanks for introducing me to my dream guy, pal!”

Although pieces worn by Meghan have consistently sold out in the past, the Husband Shirt is, indeed, still in stock today. You can shop it ahead before looking back on all the picture-perfect photos from their debut as a couple. Oh, the nostalgia!

Saved By The Bell is making a comeback!