Deschanel referred to the event, hosted by comedian and writer Ashley Nicole Black, as #ElfForGeorgia and wrote on social media that the group were able to reach their goal of $400,000.

On Instagram, Deschanel thanked everyone who joined the live stream. She wrote, “Loved reuniting with the cast and all our very special guests.” Nostalgia in the name of a good cause? Now that’s what we’re talking about!

One of the best scenes in Elf by far, besides when Buddy (Will Ferrell) eats his bowl of sugar-coated spaghetti for breakfast, is his and Jovie’s (Zooey Deschanel) hilarious “Baby, It’s Cold Outside” shower duet. You know the one. And, on the afternoon of Dec. 13, the stars reenacted the iconic scene. 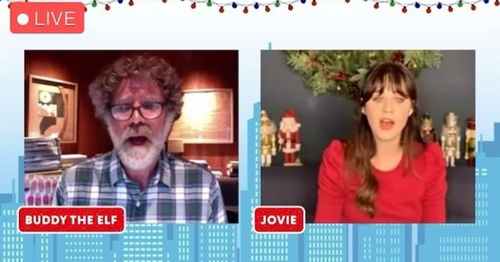 The video clip above, which Deschanel posted on her Instagram, shows her singing the holiday hit with the same beautiful voice. Ferrell is not too bad himself, belting out the final “Baby, it’s cold outsideeeee” just as he does in the movie – with feeling!

Their reunion took place during a virtual table read. Ticket sales (aka donations given in exchange for a live-stream link) benefitted the Democratic Party of Georgia, specifically Democratic candidates Jon Ossoff and Rev. Raphael Warnock, leading up to the Jan. 5 Senate runoff elections.