Cases are shown according to the week of the onset of symptoms. 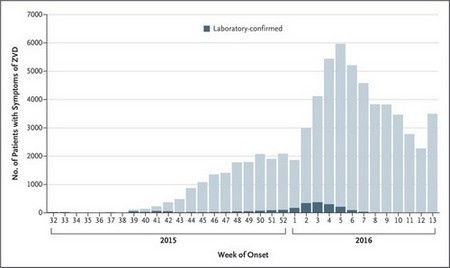 Among the 65,726 patients who were reported to have ZVD, 2336 (4%) were hospitalized at the time that the case was reported, including 938 of the 11,944 pregnant women (8%). The number of reported ZVD cases steadily increased from October 2015 through January 2016, with the largest number of cases reported during the week of January 31 to February 6 (epidemiologic week 5) (Figure 1). From February 7 to April 2 (weeks 6 to 13), the number of reported cases decreased overall, although a few areas were reporting an increased number of cases at week 13. 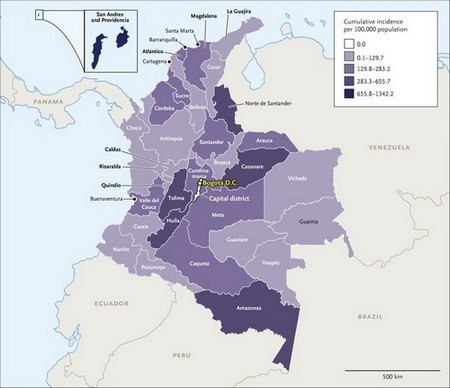 Shown are the reporting areas, which include 32 departments (i.e., states) and 5 districts (the major cities of Barranquilla, Bogotá, Buenaventura, Cartagena, and Santa Marta). The total incidence of Zika virus disease was reported separately for Barranquilla (which had 348 cases per 100,000 population), Cartagena (88 cases per 100,000), and Santa Marta (376 cases per 100,000). The Instituto Nacional de Salud did not report the incidence in Bogotá, since the cases originated in other reporting areas. The incidence in Buenaventura was included in the total number for the state of Valle del Cauca.

Zika virus has spread rapidly throughout Colombia since the first locally acquired case was confirmed. The ZVD cases are widely distributed across Colombia, with at least one laboratory-confirmed case in 35 of the 37 reporting areas. Seventeen reporting areas had more than 1000 cases; 59,585 cases (91%) were reported from these 17 areas (Figure 2). 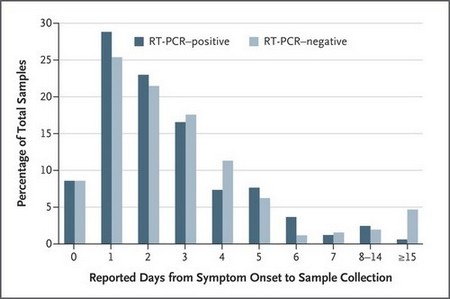 Figure 4. Distribution of Days from the Onset of Symptoms of Zika Virus Disease to Sample Collection.

Shown are data for 582 pregnant women with symptoms of Zika virus disease for whom Zika virus RNA was detectable on reverse-transcriptase–polymerase-chain-reaction (RT-PCR) assay. Of the 582 samples, 326 (56%) were positive for Zika virus. The mean number of days from the reported onset of symptoms to sample collection was 2.6 days for RT-PCR–positive samples and 4.0 days for RT-PCR–negative samples. 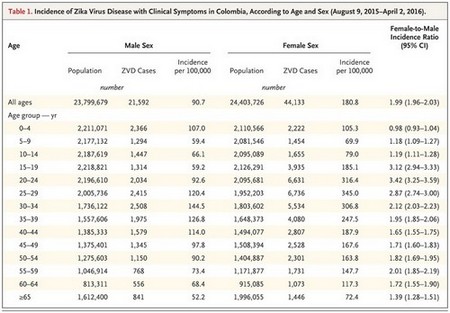 Two thirds of the reported ZVD cases were diagnosed in female patients, although these results were probably affected by referral and testing bias because of the concern about ZVD during pregnancy. There was significant variation in estimated incidence according to sex and age (Table 1). Although the incidence of ZVD was similar in girls and boys who were 4 years of age or younger, the incidence was significantly higher among female patients than among male patients in all other age groups.

Data on Trimester of Infection

At the time of this report, most pregnancies with ZVD were still ongoing, and key data, including the trimester in which ZVD was diagnosed, are still being collected. Among a subgroup of 1850 pregnant women with ZVD for whom complete data on the trimester of infection were available, 532 reportedly contracted the infection in the first trimester, 702 in the second trimester, and 616 in the third trimester.

From January 1, 2016, to April 28, 2016, a total of 50 infants with possible microcephaly were reported to the national surveillance system for birth defects. Of these cases, 26 are still under investigation, and 20 were deemed to have resulted from causes other than Zika virus infection, including STORCH (syphilis, toxoplasmosis, other agents, rubella, cytomegalovirus, and herpes) infections, genetic causes, neural-tube defects, and other causes among infants with negative results on Zika RT-PCR whose mothers had no symptoms of ZVD during pregnancy.

Four infants with microcephaly had laboratory evidence of congenital Zika virus infection on RT-PCR assay, a negative STORCH evaluation, and normal karyotypes. Of the 4 infants, who were born between 37 and 39 weeks of gestation, 1 had abnormal brain findings on ultrasonography and 3 had abnormal findings on hearing evaluations. Other clinical findings for the cases included decreased muscle tone, problems sucking or swallowing, and amyoplasia of the lower limbs. None of the four mothers had symptoms of ZVD during pregnancy and therefore were not reported as part of ZVD monitoring.

Trevor Noah, He Has Plenty of Joke Material to Work With