Miley Cyrus took to Instagram to reveal a new hair look based on her Disney alter ego, Hannah Montana. Cyrus dyed her hair from light brown to platinum blonde, with some blunt bangs added to channel Hannah’s iconic blonde locks.

Hannah Montana is back, well, kind of.

In the famous Disney show, Cyrus wore a wig when she played pop star Hannah, while she kept her hair naturally brown when was the fictional Miley Stewart.

Her fans were teased with her new look earlier in the day when she published an Instagram Story of her hair in foils telling followers to “Stay tuned.”

“You know guys, it was so hard going back and forth that I decided that I’ll just be Hannah forever,” she joked. 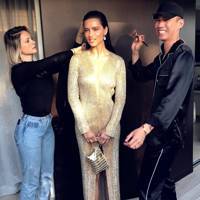 She also added “She was getting a lot of press this week, thanks to me” after Cyrus spent quite a lot of the week celebrating her character on social media.