Since Kourtney and Travis went public with their very PDA-filled romance in January 2021, many fans have been leaving comments on the couples’ Instagram pages, wondering if Scott is OK. Turns out, Scott is not OK people.

Another day, another Kourtney Kardashian and Travis Barker headline breaking the internet. But this time it’s not about them getting off with each other somewhere exotic and beautiful. Well, kinda.

In levels of shade that make the Kanye-Drake beef look practically chummy, Kourt’s ex Younes Bendjima – whom she dated between 2016 and 2018 – has leaked alleged DMs from her on-again-off-again boyfriend of 10 years, Scott Disick, who is also the father of her three children (Mason, 11, Penelope, eight, and Reign, six). And let’s just say Younes has put the Lord fully on blast.

Sharing a screenshot of what appears to be a DM from Scott to his Instagram Stories, Younes revealed that Scott had messaged him about Kourt’s new relationship. The message from Scott included a picture of Kourt and Travis kissing on a boat, with the caption: “Yo is this chick ok!???? Broooo like what is this. In the middle of Italy”. 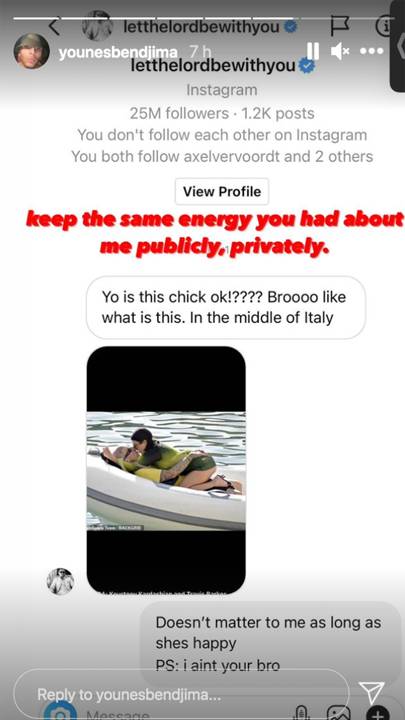 Younes replied: “Doesn’t matter to me as long as she’s happy. PS: I ain’t your bro.” Further calling Scott out, he commented: “Keep the same energy you had about me publicly, privately”. 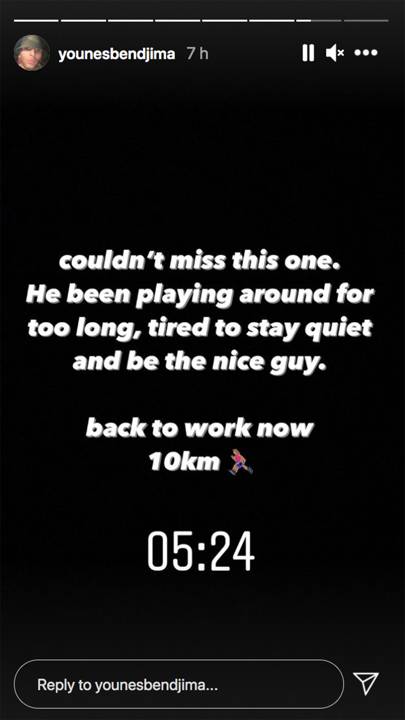 In a separate Instagram Story, Younes added: “Couldn’t miss this one. He been playing around too long, tired sic to stay quiet and be the nice guy. Back to work now 10km”.

Scott has yet to speak out regarding the very public calling-out. He is currently dating Amelia Hamlin, and during the Keeping Up With the Kardashians reunion special in June, appeared to give Travis and Kourtney his blessing.

“I think if you really love somebody, you want them to be happy no matter what. So I do give her a blessing to be happy,” Scott said.

Kourtney responded: “Whoever would make him happy, I would give my blessing”.