Palm Springs is a living, breathing snapshot of a different era: 1950s cars are parked in the driveways of pristinely manicured mid-century homes.

Australian transplant and photographer Kate Ballis made a second home out of Palm Springs, and just as she felt the novelty start to fade, she decided to experiment with alternate realities of this already transformative place.

This exploration resulted in a photo series called Hypercolour Fantasy: Infra Realism, now at the Garis and Hahn gallery in L.A., and a forthcoming book, Infra Realism, coming in November from Manuscript Printing.

“I wanted to find a way to express the city from a new, otherworldly perspective, so during Modernism Week in February 2017 I had a digital camera converted for infrared, and it completely changed the way I interpreted and literally viewed (through the viewfinder) Palm Springs,” says Ballis.

The infrared camera maintained the cinematic quality of the area and its most iconic architectural structures, like the Ace Hotel and The Parker, while “the new colors and block-color aesthetic were perfectly fitting for an ’80s fantasy land,” says Ballis. “I’m hoping the photos evoke the sense of parallel universes.” Herewith, some highlights from the striking photo series.

The Parker – Long winter shadows on the façade of The Parker hotel in Palm Springs.

Plunge – A swimming pool of an old hotel that Ballis sneaked into while it was under renovation. She thought the water looked like a cocktail.

Mountains – The thriving palm trees strongly emitting infrared light. In winter last year, Palm Springs had received so much rainfall that the mountains which were ordinarily barren were covered in plants and looked like something out of Jurassic Park. This was translated as purple in the infrared process.

Dodge – The reflection of palm trees in a glistening vintage car.

That Pink Door – This house in the Indian Canyon neighborhood of Palm Springs actually has a pink door, which is kind of lost in the infrared process, resulting in the whole house being pink! The owners receive so much social media attention for their house that they have now put a sign out front requesting no photos of it.

Shaka – Beautiful winter shadows meant that she could shoot right through the day. On a recent midsummer trip, the magic window for interesting shadows is early in the morning and 6 p.m. onward in the evening.

The Edris House – The geometric lines of this famous midcentury home sits in contrast to the “Flintstone-esque landscape”, according to Ballis.

Sands – This motel sign from the Yucca Valley alludes to the kind of Americana she was first drawn to in William Eggleston’s photos.

ACE – On her first trip to Palm Springs, Ballis stayed at the Ace Hotel because she was drawn to images she’d seen of the pool with an incredible view of the mountains. 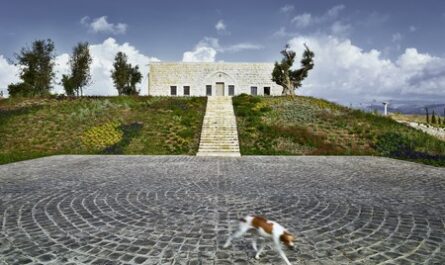 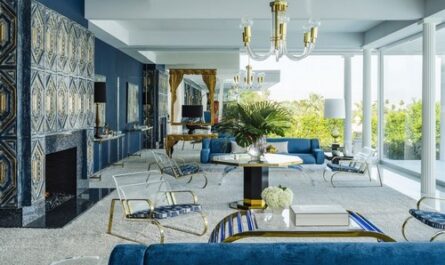