Unfortunately filming for the reunion, which will involve all of the main stars, is on hold as we battle against Coronavirus but it is certainly something to look forward to when we come out of the other side of isolation.

Remember The One Where… Phoebe has her triplets for her brother, Frank Junior and his wife, Alice, as a surrogate in seasons four and five of the hit TV series, Friends?

Well, nearly TWO decades after the episodes first aired we have unearthed what the triplets are up to IRL now. And plot spoiler… they are VERY grown-up.

As the babies became toddlers in the show, various child actors played the children but Alexandria, Paul, Justin and Cole Cimoch, who played the cute youngsters in the ‘The One With Joey’s Porsche,’ are the ones we have been able to track down by the power of TikTok.

Alexandria shared on the social media platform, “Was I on a famous TV show as a baby?” (yes) and “Was I one of Phoebe’s triplets on Friends?” (also yes).” What a newsflash.

And with a little more social media delving, we have discovered over on her Instagram account that they are not triplets, they are in fact quadruplets and she is the only girl with three brothers. 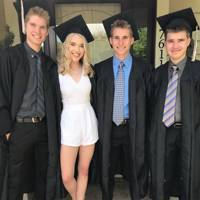 Alexandria has shared a series of snaps of the four siblings, including at their high school graduation and also revealed they were all cast to play the three siblings on the show.

The quadruplets didn’t consistently play the triplets and when they came back into the show, they were played by Dante Pastula, Sierra Marcoux and Allisyn Ashley Arm.

As we eagerly await the reunion of Friends on our TV screens – as revealed on Jennifer Aniston’s Instagram account earlier this year – it is unknown whether the triplets will reappear in the new incarnation of Friends.

Where 18 of Your Favorite Chopped Champions Are Today

31 Lessons From Some of Our Favorite Single Women in Movies