The Duchess of Sussex donned a bespoke navy crew neck sweater by Givenchy with a bespoke navy pleated skirt, also by the designer, during her royal tour of New Zealand. Those who follow Meghan’s style may well recognise the look because she has the exact same top in green. Once again, Meghan opted for that boatneck style that suits her SO well. 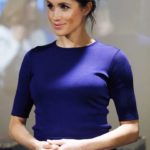 Meghan proved she’s as thrifty as us by snapping up this purse-friendly maternity dress from ASOS for £44. The classic LBD has a boat neck (Meghan’s failsafe neckline) and a high-rise empire line. Finally, royal fashion we can all afford! 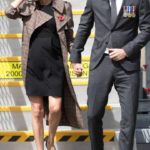 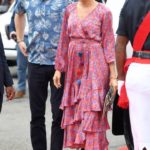 Meghan was a vision in pink as she stepped out in Fiji wearing this ruffled printed dress embellished with pompoms from the bohemian-inspired label, Figue. 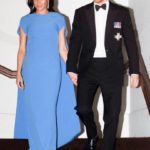 Meghan shows off her pregnancy glow in a striking blue Safiyaa gown at a state dinner in Fiji and we’d argue its her best look yet. 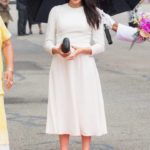 The Duchess of Sussex touched down in Fiji in a stunning white long-sleeved Zimmerman dress. 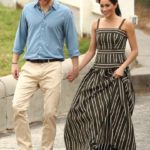 Meghan stepped out during her and Harry’s Australian tour looking super chic wearing a striped maxi dress by Martin Grant on a visit to Bondi Beach. 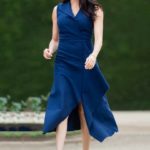 Meghan is absolutely nailing pregnancy style, arriving in Melbourne in a smartly tailored navy dress by Australian label, Dion Lee, offset with classic court shoes. Fashion fans were so desperate to get their hands on the dress that the designer’s website totally crashed – even though the dress isn’t even on sale yet. 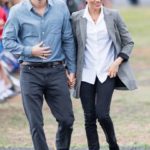 Meghan stepped out in Australia in a low-key look with hairstyle to match. The pregnant royal donned a pared back top from Maison Kitsune, skinny jeans by Outland, boots from J.Crew and a grey blazer designed by her best pal, Serena Williams. 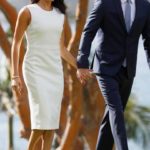 Meghan Markle looked ethereal as she stepped out for the first since announcing her pregnancy. She was a vision in this £973 white figure-skimming dress by Australian label, Karen Gee. 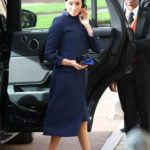 Meghan opted for a loose-fitting navy coatdress by Givenchy as she made a stunning entrance at the Royal Wedding of Princess Eugenie and Jack Brooksbank. 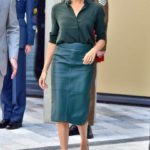 Meghan just gave her a lesson in how to do head-to-toe green on a trip to the University of Chichester’s Engineering and Digital Technology Park. While her skirt was a £369 number from Hugo Boss and her Gabriella Hurst tote set her back £1,695, fashion fans on a budget will be delighted to know that her shirt was £39 from & Other Stories; get it while you can! We’re also v into these Stuart Weitzman heels. 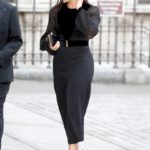 For her first royal solo engagement at the opening of the ‘Oceania’ at the Royal Academy of Arts, Meghan donned this divine £2,510 Givenchy gown, offset by this small black box clutch, which she also snapped up at Givenchy for a cool £1,390. 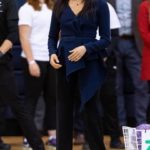 The Duchess of Sussex attended the Coach Core Awards held at Loughborough University wearing a £1636 navy peplum top by Oscar de la Renta, and trousers by Altuzarra. So. chic. 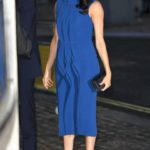 Meghan looked super chic in this royal blue Jason Wu dress, which she had custom-made for her (naturally). Meghan offset the ruffle front dress with satin sling-backs from Aquazurra. 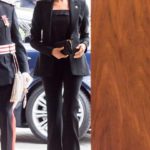 Meghan joined her husband, Prince Harry, at the WellChild Awards and looked effortlessly chic in this incredibly classic black Altuzarra jacket-and-trouser combo teamed with a £173 pared back black blouse by Deitas. The leg-lengthening trousers worked wonders for the royal and it’s a style we can’t wait to copy this season. 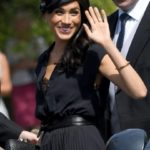 Meghan celebrated her 37th birthday as Prince Harry’s date for his best friend’s wedding. Donning a black Club Monaco dress and Philip Treacy hat, Meghan was the epitome of chic. However, the trolls were out in force (as per usual) and rushed to comment on the fact that Meghan’s bra was ever so slightly on show. Have they really got nothing better to talk about? We think she nailed the wedding guest look and hope she enjoyed her first birthday as a royal. 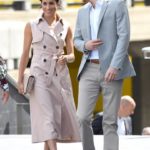 Meghan looked to best friend and unofficial stylist Jessica Mulroney to help pick her outfit for an outing with Harry to the Nelson Mandela centenary exhibition in London. The choice? A stunning sleeveless trench coat dress by Canadian label House of Nonie. 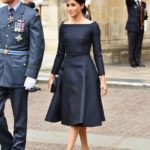 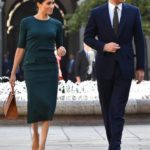 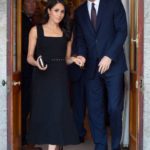 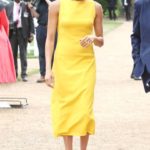 Having worn so many muted hues recently, we were thrilled when Meghan stepped out in this zesty little Brandon Maxwell number. Did you know, Brandon has worked as Lady Gaga‘s stylist since 2012. That’s what you call versatile… 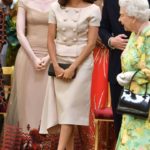 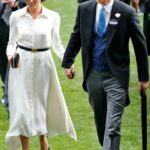 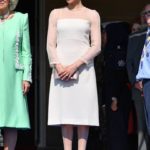 Meghan makes her first outing as the Duchess of Sussex. The newlyweds stepped out to celebrate Charles’ 70th birthday at Buckingham Palace. Meghan chose a rose-hued dress from Goat, paired with a Wilbur & Gussie bag and a Philip Treacy hat. 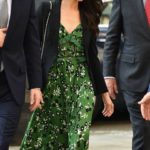 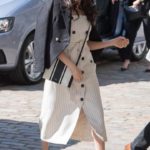 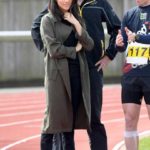 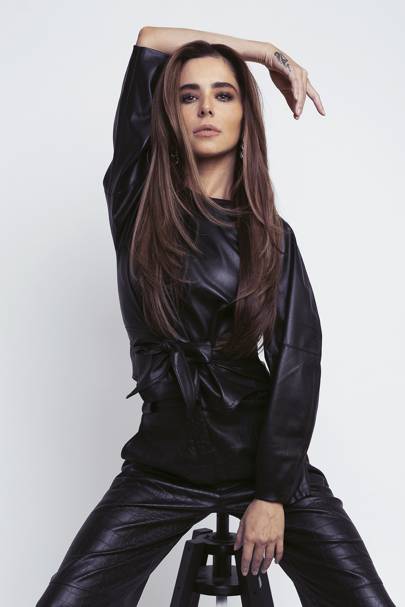 Exclusive: Cheryl reveals she wants to rumba with Michael B Jordan