That’s right, even the restaurant synonymous with fatty, caloric, stereotypical cheat day grub is eager to cash in on the health food craze, even though it’s hard to imagine very many vegans being interested in eating at McDonald’s, even with designated food options.

For the first time in fast food history, the word “McDonalds” and the word “vegan” have cause to be uttered in the same breath. Yes, the chain is currently testing a vegan burger, aptly named the “McVegan”, at a location in Finland, People reports. The soy patty will be available from October 4 through November 21, and if enough Finns (or hungry tourists) like it, it could come to the U.S. and other locations.

After all, strict vegans and vegetarians might not be eager to consume food prepared in a facility that’s mostly used to cook meat. And while McDonald’s claims the french fries in its Finnish locations are vegan, the company was sued earlier this year for failing to disclose that they use a small amount of beef for flavoring purposes in french fries in the U.S.

Then again, the sandwich, which features all of the accouterments of your average McDonald’s burger (including vegan McFeast sauce, lettuce, tomatoes, pickles, and a sesame seed bun), minus the cheese, could be a welcome alternative when you feel a Mac Attack coming on but don’t want to consume the questionable ingredients that go into those beef patties. 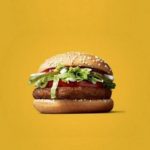 Many Finns who have tried the burgers have taken to social media to praise them, Bon Appetit reports. “Who would’ve believed? McD selling vegan burger,” one patron wrote on Instagram. “Quite good to my taste.” There you have it, folks. The vegan burgers at McDonald’s are a hit. What a time to be alive!