The Olympic gold medalist joined Abby Wambach onstage at the 2019 MAKERS conference on Thursday, where Schofield spoke about having to address what people interpreted as “mansplaining” from her male colleague Pierre McGuire during NBC’s “Wednesday Night Hockey” broadcast.

Kendall Coyne Schofield made history when she became the first woman to compete during the NHL All-Stars Skills Competition on Jan. 25. But despite being recognized for dominating the sport in the way that she has, Schofield’s big moment was quickly overshadowed by an incident that happened with a male broadcaster just a few nights later.

Although she admitted to not having noticed any hints of sexism while on-air, the athlete told Wambach just why she decided to put out a statement on the issue after internalizing others’ reactions to it.

“In that moment, no matter what Pierre said, I was focused on what I was going to say. I wanted to nail my moment. It was my first moment on national television as an analyst – and specifically a woman,” Schofield told Wambach. “And then afterwards, I was getting a lot of messages and people saying, ‘Oh I’m so sorry the way you were treated.’ It was almost degrading to me because I’m like, well, how did I do as an analyst? The moment that I felt I earned was being overlooked by a man’s tone and words that I had no control over.” 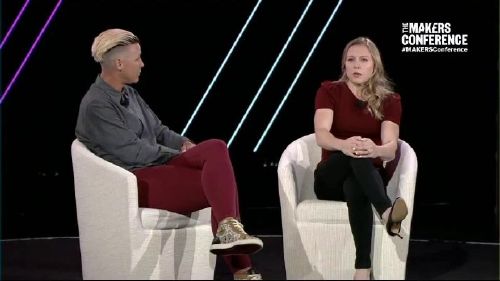 Still, Schofield gained control over the situation by analyzing what had taken place and addressing the incident herself. She explained to Wambach that what made her realize McGuire’s words weren’t OK was considering if he would have said the same thing to a male player.

“I know Pierre, I know how excited he was for me in that moment. However, that doesn’t make what he said right,” Schofield explained. “If there was a NHL player in between the benches with him, would that have been said? I don’t know if I could answer that correctly. And that’s what, to me, made the situation not right and that’s why I addressed it the way I did.”

The NWHL player additionally addressed the situation while speaking with Yahoo Lifestyle, where she said that facing both the good and the bad that comes with changing the course of her sport has ultimately become a learning lesson for everyone.

“People have been so extremely supportive,” Schofield says of her NHL performance and her acknowledgement of McGuire’s remarks. “It makes you wanna be the best version of yourself for those you don’t even know. You never know whose life you’re changing or inspiring along the way.”

After breaking barriers at the NHL event, Schofield went on to inspire more players by beating out her own fastest skate record during the NWHL All-Star competition on Saturday. Her performance during both events is just one indication that the sport is transforming.

“It’s opened the doors for the future of women in hockey,” Schofield explains. “I think it’s only a matter of time before people start looking at men and women, girls and boys, equally in the sport of hockey.”

Get spirited this St. Patricks Day with these 17 festive items