Women who want to get pregnant should have their zinc levels tested three months in advance to detect deficiencies that could cause fertility problems, new research suggests.

Infertility is on the rise in the US with more than one in 10 couples in the US experiencing problems with conceiving.

A growing body of research suggests that women take more supplements including zinc, known as ‘the fertility mineral’ because of the large role it plays in regulating the reproductive system. 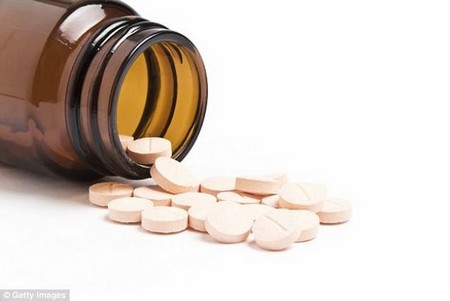 Zinc deficiencies, which affect 80 percent of women, can cause infertility by inhibiting the development of eggs, a new study has found

Fertility research has exploded in recent years as more couples open up about their struggles to conceive and search for a solution.

One specific area of research that’s received a lot of attention is how micronutrients in the ovaries influence the development, viability and quality of egg cells.

Zinc is commonly thought of as the most important of those micronutrients.

More than 80 percent of women in the US have zinc deficiencies.

The mineral aids in regulation of hormones, cell division during the egg development process and maintaining a health environment within the ovaries.

The ovary is made up of about one million structures called follicles, which consist of one egg cell supported by layers of somatic cells.

Each month several follicles begin to mature, but typically one will be released in ovulation and have the chance to be fertilized.

Most of the current studies available focus on the group that begin to mature each month, known as the antral stage, which ends at ovulation.

In the study published Tuesday the researchers took a more novel approach and looked at the pre-antral stage, which refers to the period before the antral stage when follicles are still growing.

The pre-antral stage begins 90 days before an egg could be ovulated.

‘Previous studies showed that zinc levels are critical in the antral follicle, but no one had tested the effect of zinc deficiency on preantral follicle growth,’ said lead author James Hester, a graduate student in Integrative and Biomedical Physiology at Pennsylvania State University.

The researchers collected preantral follicles from mice and matured them in two different environments that mimicked that of the ovary during the maturation process, one with normal levels of zinc and one with deficient levels.

The most striking finding was that insufficient levels of zinc impaired the egg cell’s ability to properly divide, a necessary step before successful fertilization can occur. This defect persisted even after more zinc was introduced to the environment.

The zinc-deficient environment was also found to disrupt follicle cell growth, resulting in smaller eggs and fewer somatic cells, which are needed to support the egg.

Overall the findings revealed that low levels of zinc inhibited the body’s ability to produce eggs that would be able to become fertilized.

They also indicate that the harmful effects of zinc deficiency began much earlier than was previously thought, and were difficult to reverse.

‘Interestingly, the eggs commonly used for IVF are collected from antral follicles, so any effects from preantral development have already occurred,’ he said.

Why ‘little and often’ exercise is so good for you