Emergency responders say a 61-year-old man fell off his boat into the Black River on Monday at the River Norie Yacht Club in South Haven.

A Michigan man has an Apple Watch to thank for saving his life after he fell off his boat and nearly drowned.

His quick-thinking wife threw him a life ring and managed to pull him to the swim platform, but couldn’t get him out of the water. She then used the Apple Watch  on her wrist to call 911.

A Michigan woman used an Apple Watch to call 911 after her husband fell off their boat into freezing temperatures. She threw him a life ring, but was unable to pull him out of the water

‘If she had let go of him to retrieve her phone, the man would have drowned,’ South Haven Area Emergency Services said. 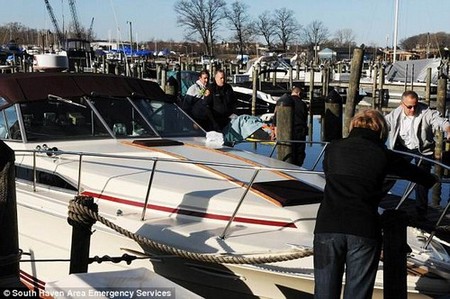 The water was 42 degrees, and the man was ‘almost lifeless’ when rescuers pulled him from the river.

He was then able to talk with rescuers and was treated by paramedics before being transported to Bronson South Haven emergency room.

Apple Watch automatically calls the local emergency number when a user makes a call with its SOS function.

To use it, the owner’s iPhone must be nearby or the Watch needs to be connected to a Wi-Fi network with Wi-Fi calling enabled. 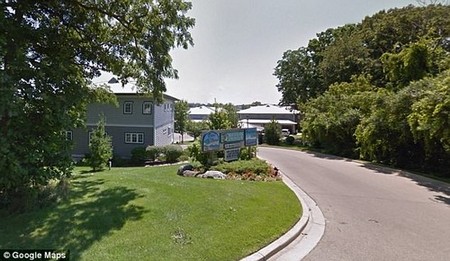 If the woman had let go of her husband to retrieve her phone, the man would have drowned. The accident happened at the River Norie Yacht Club in South Haven, Michigan

HAVE APPLE WATCHES SAVED LIVES BEFORE?

In 2017 Bennett, from Laytonsville, Maryland, was driving home from school the night of April 6 when he was struck by another vehicle – sending him and his Jeep Patriot flying through the air.

Bennett, 22, found himself hanging from the driver’s seat by just his seat belt, but his iPhone was too far out of reach to call for help.

However, he remembered the Apple Watch included the SOS Emergency feature – he held the side button down and contacted 911 for help, who were on the scene in six minutes.

Several users have also used to heart rate monitoring capabilities of the Watch to alert them of problems.

Apple Watch automatically calls the local emergency number when a user makes a call with its SOS function by holding down the side button. Emergency services said the watch saved the man’s life

A 28-year-old reporter claims the only reason he is only alive today is because of a notification on his Apple Watch.

James Green credits the gadget, which costs between $329 and $1,399 for the latest model, with spotting a life-threatening blood clot on his lungs.

His timepiece notified him of a sudden rise in his heart rate – a sign of a pulmonary embolism – which he had already suffered once before.

It prompted him to seek urgent medical help, and doctors later diagnosed him with the clot – which can kill in minutes as it stops blood from reaching the lungs.

Mr Green, from New York, tweeted: ‘Never thought a stupid lil sic wrist computer I bought two years ago would save my life.

‘Saw my heart rate go up, ended up being a pulmonary embolism.’ His warming post has since been retweeted 11,000 times.

On Apple Watch Series 3, a cellular connection works even if you don’t have your phone nearby.

The user must hold down the side button until the Emergency SOS slider appears.

A countdown begins, which the user can override by sliding the SOS notification.

After the call ends, the watch sends out the owner’s location to their emergency contacts.

Woman with rare disorder that makes her smell like FISH

Doctors are calling for heroin, cocaine and cannabis to be made LEGAL