A woman targeted by cruel bullies because she was born with extensive birth marks has stripped off after years of covering her skin.

Lorena Bolanos, 24, from Queretaro, Mexico, has more than a dozen raised birthmarks, or moles, including a large one, known as a giant congenital melanocytic nevus, which covers much of her torso.

She was taunted as a teenager over the way she looked, with peers calling her ‘Dalmatian’ and making fun of her appearance. On one occasion a classmate even told her she should ‘kill herself’ because of the way she looked.

The constant negativity drove Lorena into a deep depression during her first year of university. She was also left too ashamed to expose her birthmarks in public, instead covering them with long-sleeved t-shirts and scarves – despite the hot climate. 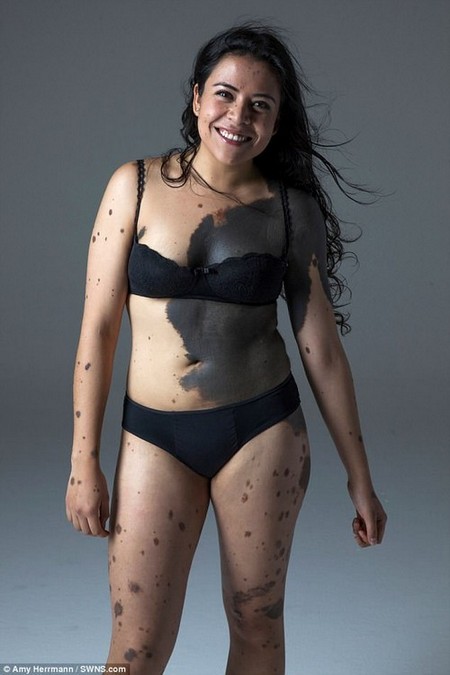 Lorena Bolanos, 24, from Mexico, was branded a ‘chocolate chip cookie’ by cruel bullies because of her birthmarks. She has now stripped off to promote body positivity

Now the body positivity activist has bared almost everything in a revealing photoshoot as part of the Underneath We Are Women project, which champions diversity.

Lorena explained her attitude towards her body changed earlier this year when she saw an online troll abuse another woman on Facebook about her appearance.

She shared a post on her Instagram talking about her birthmarks which quickly went viral, leading to her being chosen for the body confidence shoot.

Speaking about her journey to confidence, Lorena said: ‘When I was a little kid it wasn’t a problem. My mom always said, “You’re a healthy child don’t worry about it”. 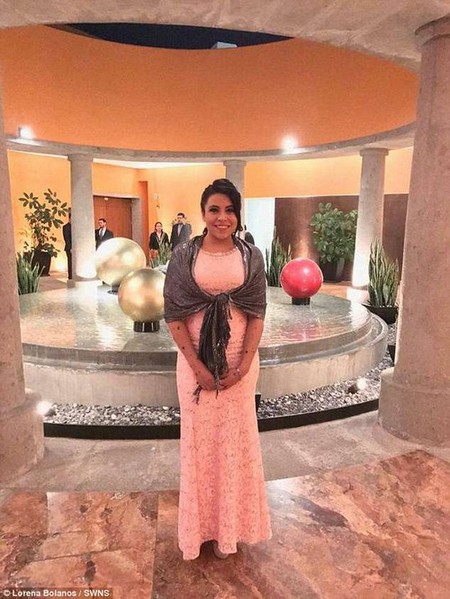 Lorena was also left too ashamed to expose her birthmarks in public, instead covering them with long-sleeved t-shirts and scarves – despite the hot climate

‘It was when I started school that it got really terrible. I was so uncomfortable.

‘Kids would stare at me and they started calling me “Dalmatian” which was so hurtful and cruel. It made me feel so bad about myself.

‘I would come home from school and just cry with my mom. When I was a teenager, I just didn’t have relationships. I wasn’t confident enough.

‘In middle school I was lucky to have a group of really supportive friends but in high school, everything changed. 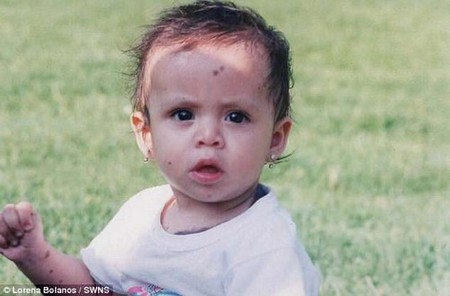 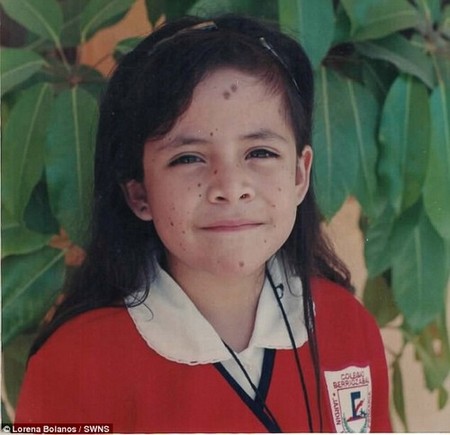 ‘I was on my phone one evening when this guy from my school sent me a message. It said, “Why don’t you just kill yourself?”

WHAT IS A GIANT CONGENITAL MELANOCYTIC NEVUS?

A giant congenital melanocytic nevus is a birthmark that covers more than two per cent, or 20cm, of a sufferer’s body and requires more than one incision to remove.

The head, legs and
arms are normally affected.

Treatment can involve birthmark removal, however, scarring is likely.

Laser therapy can reduce skin pigmentation, however, in some cases the colour returns.

‘I had become so used to it that I just ignored it, but when I showed it to my friend she was outraged. She asked him how he could ever dream of saying that to someone.’

Lorena told how a few months ago she spotted a comment left for a beauty blogger she follows on Facebook from a man who called her mole ‘disgusting’.

She continued: ‘I thought to myself, she is so beautiful, how can anyone talk to people like this. It inspired me to take a photo of my own body in a bikini and put it on Instagram.

‘For my whole life I had covered up because I was ashamed but I just decided to tell my story and show the world my marks.

‘I never dreamed of the response. I had mums writing to me that their daughters were inspired by me.’

The response to Lorena’s post was so large that she came to the attention of Underneath We Are Women curator, Amy Herrmann.

Lorena would often cover her skin in jumpers and trousers, despite the heat

Lorena flew to Santa Monica to be photographed by Amy for the project in March, which will result in the production of a photo book celebrating different bodies.

‘I was really terrified but Amy made me feel so comfortable,’ she said. I didn’t tell many people except my mom, but she encouraged me to do it if it made me happy.’

Although Lorena has to protect her skin from the sun because she is at greater risk of skin cancer, she said she has grown to love her body for what it is. 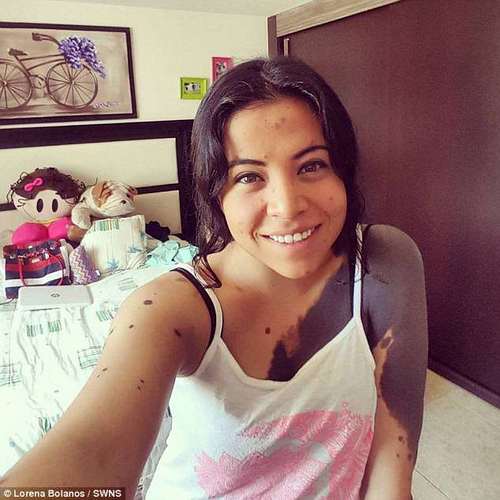 A picture she posted on Instagram about her moles went viral and she came to the attention of Underneath We Are Women curator, Amy Herrmann

‘With my birthmarks, I need to be very careful about sun protection. I have to make sure I cover up and wear a lot of SPF.

‘But the reason I wanted to be more open about my body is because I want to change the concept of beauty.

‘Before, my moles weren’t beautiful to me but I’ve learned to accept myself and love my body because it’s the only one I’ve got.’

Lorena flew to Santa Monica to be photographed by Amy for the project in March, which will result in the production of a photo book celebrating different bodies

Although Lorena has to protect her skin from the sun because she is at greater risk of skin cancer, she said she has grown to love her body for what it is

Why won’t NHS surgeons save this little girl’s leg? 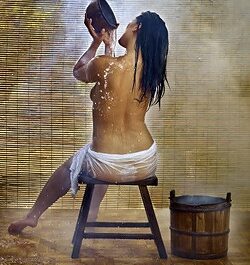