A woman had a cockroach stuck in her ear for more than a week after the insect crawled in while she slept.

Katie Holley, 29, from Florida, woke startled to find what felt like a piece of ice lodged in her left ear, only to discover two bug legs sticking out.

After her husband was only able to remove a few legs with tweezers, Ms Holley rushed to A&E while the cockroach continue to wriggle deeper in her ear canal.

Doctors thought they had removed the roach until, nine days later, Ms Holley continued to experience pain and a loss of hearing in her ear, leading to a local medic removing six more piece of the insect’s carcass.

Ms Holley said: ‘He told me that he extracted bugs from peoples’ ears at least once a month – and I was the second person that day who needed it.’

Cockroaches are thought to crawl into people’s ears in search of food. 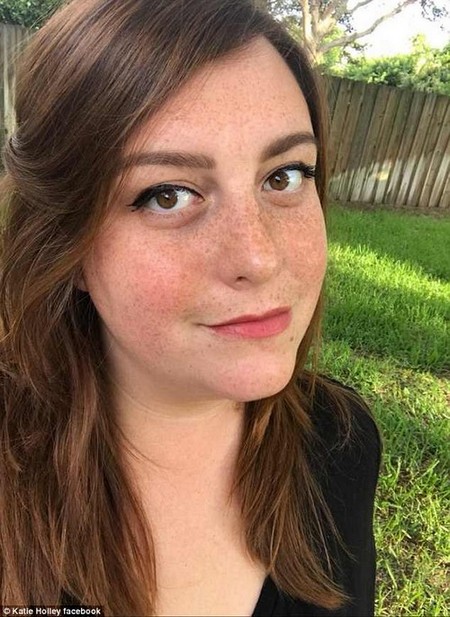 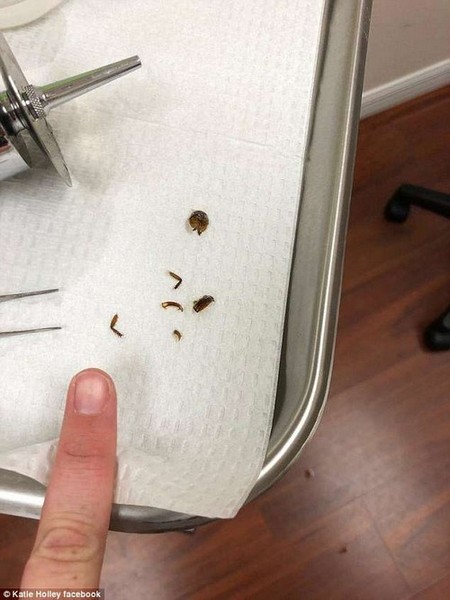 At A&E, doctors thought they removed the cockroach, which was smaller than a little finger

Nine days later, with her hearing still affected, a specialist pulled out the insect’s head

‘Roaches are searching for food and earwax might be appealing’

When Ms Holley arrived at A&E, doctors administered the numbing drug Lidocaine in her ear, which caused the insect to ‘react’.

She told SELF: ‘Feeling a roach in the throes of death, lodged in a very sensitive part of your body, is unlike anything I can adequately explain.’

Ms Holley visited a doctor when her symptoms continued, who was confident all of the insect had been removed, but referred her to a ENT specialist to be safe.

She said: ‘Once I got situated in the fancy chair in his office later that day, the ENT placed some sort of microscope beside my ear.

‘He didn’t say much, but he did confirm there was still “something in there”.’

Professor Coby Schal, from North Carolina State University, who studies insects, previously told the National Geographic: ‘It’s actually not an uncommon phenomenon to have a cockroach in the ear.

‘Roaches are searching for food everywhere. And earwax might be appealing to them.’

This comes after stomach-churning footage released last month showed a specialist removing a wax-covered pen cap that was lodged in a patient’s ear for years.

YouTube sensation Neel Raithatha, aka The Wax Whisperer, who runs The Hear Clinic in Oadby, Leicestershire, said: ‘I was shocked as at first I was unaware of what the object was. It is the worst item I have seen stuck to date.’

Buried deep in the unnamed patient’s ear canal, footage shows Mr Raithatha using forceps to dislodge the waxy object, before presenting it to the camera.

Mr Raithatha said: ‘The patient advised he must have accidentally dislodged the bottom end of a pen inside his ear as he had a habit of scratching the inside of his ear canal using the back of a pen.’

The patient was referred to Mr Raithatha after being unable to have his ear syringed due to the mysterious blockage.