When Huda Beauty launched Easy Bake Loose Powder last summer, Huda Kattan called it a “game changer.” She meant that it would help make the technique of makeup “baking” foolproof, of course, but for one Missouri makeup lover, it literally changed their game of laser tag by changing the color of her face.

Last Sunday, Amanda Whitrock went with friends to a local laser tag facility, her makeup set with a dusting of Easy Bake Loose Powder. And while her makeup looked lovely in most settings, her friends were shocked to see that once they got under the laser tag black lights, Whitrock’s skin took on an intense reddish-purple hue. Luckily, they snapped a few photos, which Whitrock posted to Facebook with a friendly word of warning.

Captioning a photo of herself in normal lighting alongside a couple where she’s in an ultraviolet setting, she wrote, “Don’t use the HUDA baking powder if you plan on doing laser tag ??”

The reddish-purple face was a first for Whitrock, who’s done laser tag before – but never quite like this. “I’ve done it while wearing the same foundation but using a different setting powder,” she tells Allure, explaining that she was wearing Nars Natural Radiant Long Wear Foundation under the Easy Bake Loose Powder. “I’ve never seen this happen before.”

My best guess for why this happened? Easy Bake Loose Powder contains synthetic fluorphlogopite, which is often used as an alternative to mica in cosmetics. Studies have found it’s perfectly safe – even the Environmental Working Group isn’t worried about it – but because it contains fluorine, it may very well have fluorescent properties that become apparent under black light.

>Whatever the reason, the reaction has been as wild as the photos. Whitrock’s public post has been shared on Facebook nearly 20,000 times and has collected thousands of comments, most of which have been laughing-face emojis and people tagging friends who may have the powder, too. Others made some creative comparisons, with one commenter saying, “She looks like the red demon from Insidious,” and another wrote, “Oh my lord she look like Violet from Charlie and the Choclate Factory.”

However, Whitlock tells Allure that her favorite comment was left by her own mother: “Not exactly how I wanted my child to go ‘viral’ but there she is KILLING IT!!”

She obviously has a great sense of humor about the whole thing, and while she may not wear Easy Bake Loose Powder to play laser tag again, it’s easy to see that it looks phenomenal in non-black-light situations – which is arguably most situations. 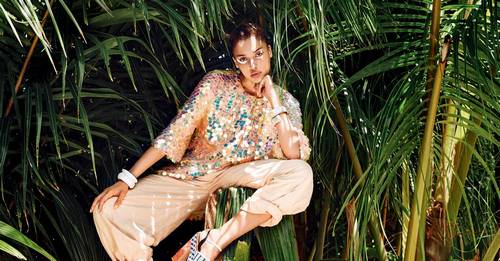 The Dairy-Free Eggnog Recipe You Won’t Feel Guilty About