Matt Wetherbee, 30, has been in a wheelchair for the past two years following the accident that damaged the upper portion of his spine just days before he planned to propose to his girlfriend of five years Kaitlyn Kiely.

A man who was left paralyzed from the shoulders down after a freak basketball accident has completed the Boston Marathon with a big push from his girlfriend.

Since the accident he’s undergone extensive therapy in hopes that he can one day get back on his feet and use his own two arms to propose to Kaitlyn, who has been helping him adjust to his new life.

On Monday the couple set out to prove that they could overcome all obstacles as Kaitlyn pushed Matt along all 26.2 miles of the Boston Marathon route. 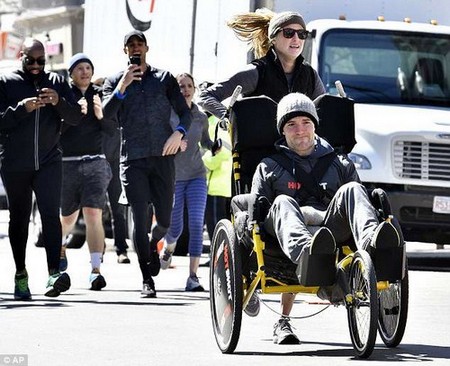 Kaitlyn Kiely, 30, is pictured pushing her boyfriend Matt Wetherbee, 30, along the Boston Marathon route on Monday as friends cheer them on in the background 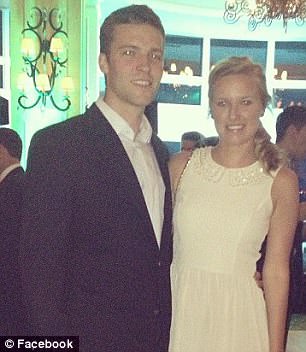 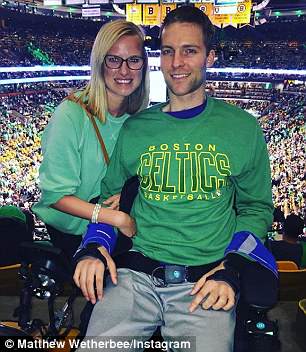 Matt was left paralyzed from the shoulders down after damaging his spinal cord while playing basketball in 2016. He and Kaitlyn are pictured before, left, and after, right, the accident 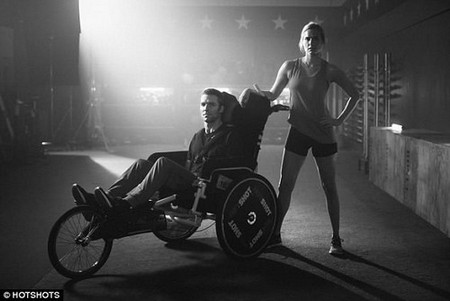 On June 7, 2016, Matt was playing basketball with his local men’s league when he tripped over a defender’s leg.

Without time to brace his fall the then 28-year-old fell head-first into the wall.

‘I was conscious, and I knew something was immediately wrong because I couldn’t move anything,’ he told People.

The fall resulted in several torn ligaments and damage to Matt’s spinal cord.

He spent the next two months in the hospital recovering, followed by three months in a rehab hospital.

Matt now undergoes electronic stimulation therapy four times a week, which aims to retrain nerve pathways and eventually recover the function of his arms and legs.

As of right now he is still paralyzed from the chest down but has been making strong improvements. 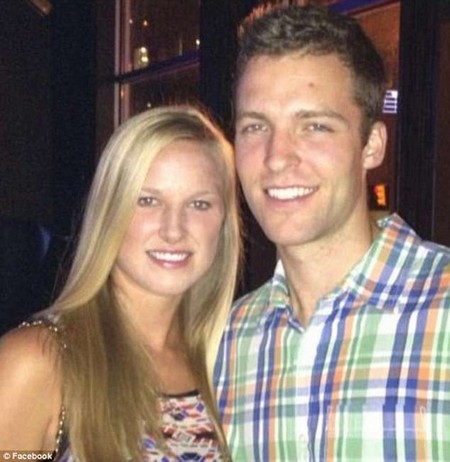 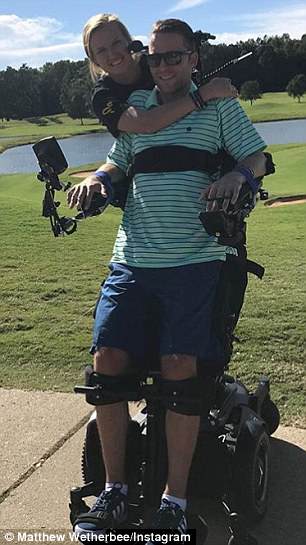 Kaitlyn said: ‘We’re trying now to figure out how to navigate our new life, find our new normal.’

This year they made a plan to participate in the Boston Marathon coming up on Monday, with Kaitlyn pushing Matt along the route in his chair.

She trained for the race for weeks with a borrowed racing chair she filled with 50-lb bags of salt to mimic what it would be like to push Matt.

Unfortunately they missed the sign-up deadline and were told they couldn’t compete.

‘We’re sick of hearing “no”, or feeling like we couldn’t live our lives the way we want to. If you want something to happen, find a way to make it happen.’

They ultimately did find a way to to the race, with the help of a local company called HOTSHOT that produces sports drinks.

On April 9, one week before the official event, the couple set out on the 26.2-mile trek.

The couple are pictured at the finish line after completing the 26.2-mile course on Monday

When they crossed the finish line an impressive five and a half hours later they were met with cheers from friends and family members.

‘That was definitely the best part for both of us. I was shocked to see how many people were there at the finish line,’ Matt said.

‘We both got pretty emotional at the end. I cried, and that doesn’t happen often.’

Kaitlyn added: ‘It’s an awesome feeling, but to cross it with the love of your life sitting in the chair below you and all of your family and your friends right there,’ she said, ‘it’s probably the coolest thing I’ve ever done in my life.’

At the finish line HOTSHOT gave Matt a $25,000 check that will go to his physical therapy center, Journey Forward.

The couple also have a fundraising page for people to donate money for his therapy sessions, which can cost $100 each.

What do your taste buds say about you?