It’s no secret that writers love maps; cartography is a powerful tool that can help bring an author’s vision to life. There have been countless examples throughout literary history – just look to Robert Louis Stevenson’s Treasure Island, J.R.R. Tolkien’s Lord of the Rings trilogy, or Thoreau’s map of Walden Pond.

Though perhaps none are as well-loved and recognizable as the map of the Hundred Acre Wood at the beginning of A.A. Milne’s classic tale Winnie-the-Pooh. In addition to being the entry point into one of the most-read children’s stories of all time, the drawing now boasts a second claim to fame: It has just set a new record at Sotheby’s in London as the most expensive book illustration ever sold, for $570,000.

An illustration of Christopher Robin and Winnie the Pooh walking through the Hundred Acre Wood, which sold at Sotheby’s London.

Drawn in 1926 by illustrator E.H. Shepard, the map depicts the homes of beloved characters from the story, such as Christopher Robin, Pooh Bear, Piglet, Owl, Eeyore, and Kanga and Roo, in addition to other local spots. 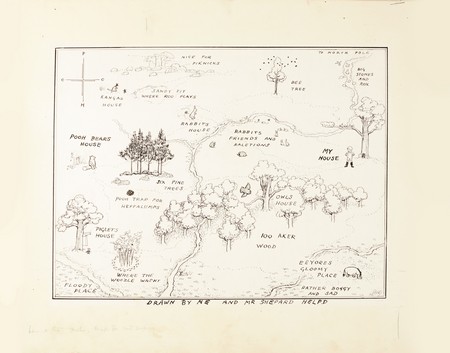 The characters themselves are pictured throughout with a dash of personality; Pooh sits contemplatively on a log outside of his house, Roo bounces happily towards the sand pit where he plays, and Eeyore bows his head outside of his “gloomy place,” which is described as “rather boggy and sad.”

The map is drawn with a childish charm; misspelled words like “rox” and “aker” are peppered throughout, while a label at the bottom reads “Drawn by me and Mr. Shepard helpd.” Forty years after the map was first published, it appeared in the Disney film Winnie-the-Pooh and the Honey Tree, where it was brought to life as an animation in the film’s opening sequence.

The illustration was offered alongside four other original Winnie the Pooh drawings, also created by Shepard, all of which have been out of the public eye for nearly 50 years. Combined, the five illustrations were sold for a total of $1.2 million, though they were estimated to only fetch between $412,000 and $584,000. “…

This is probably the most famous map in English literature,” says Dr. Philip W. Errington, the director and senior specialist of Sotheby’s department of printed books and manuscripts, in a press statement. “I suspect that there isn’t a single child who wouldn’t instantly recognize this wonderful depiction of The Hundred Acre Wood.” 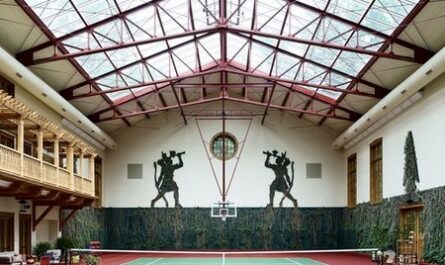 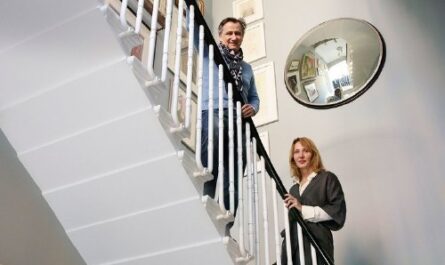