Some over-the-counter pain relievers are safer for your organs than others – but those benefits could be derailed when combined with aspirin, a major new study shows.

For more than a decade, Cleveland Clinic scientists have been working on the biggest ever investigation into the specific risks associated with the most commonly-used pain pills.

One strand of that investigation, published today, confirms that the millions of patients who take daily NSAIDs (nonsteroidal anti-inflammatory drugs) for arthritis should beware taking aspirin, which many take to lower heart risks in old age.

They found that one NSAID, celecoxib, is safer than others on all fronts – but even still, when combined with aspirin the risk of heart attacks, anemia, bleeding stomach, and kidney complications sky-rocketed.

While the findings are crucial information for doctors prescribing these medications, for many it merely emphasizes the catch-22 situation: for elderly people with chronic pain, it can often feel like a guessing game picking which risks to prioritize. 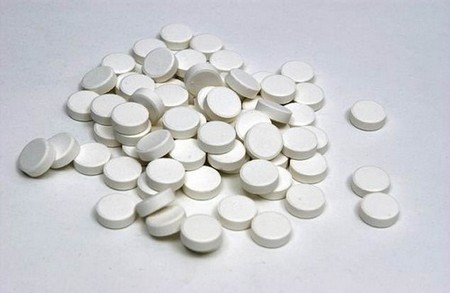 For more than a decade, Cleveland Clinic scientists have been working on the largest ever investigation into the specific risks associated with each drug

‘NSAIDS are some of the most widely used drugs in the world with more than 100 million prescriptions issued annually in the United States,’ said Dr Steve Nissen, MD, chairman of Cardiovascular Medicine at Cleveland Clinic, and the study’s principle investigator.

‘Past studies have reported conflicting results regarding using NSAIDs together with aspirin, but we know that many patients do combine the medications, so it was vital to understand the risks and differences among the drugs.’

The 10-year PRECISION trial (Prospective Randomized Evaluation of Celecoxib Integrated Safety versus Ibuprofen or Naproxen) studied 24,000 arthritis patients who were taking either celecoxib, naproxen or ibuprofen for chronic pain.

Of those, 11,000 were also taking aspirin for other ailments.

Specifically, the study found that celecoxib (Celebrex), which is widely prescribed for arthritis and menstrual pain, has fewer risks to the heart, kidney and digestive tract than ibuprofen and naproxen.

However, when combined with aspiring its risks for the heart increase by six percent.

Ibuprofen, meanwhile, was deemed riskiest for the kidneys when combined with aspirin. The combination increased the risk of all issues by 7.1 percent, including harm to the digestive tract and the heart.

Naproxen was similar in its damaging effects to celecoxib, but was more damaging than others to the digestive tract.

First author Dr Grant Reed, MD, an interventional cardiology fellow at Cleveland Clinic, said: ‘The outcomes of this study could lead to changes in clinical practice.

‘If a patient is not on aspirin, these results suggest that in many cases, celecoxib may be the NSAID of choice.

‘Our findings underscore how important it is that physicians counsel their patients when starting them on an NSAID and consider the potential effects of use together with aspirin.’