We’ve loved her as a freckle-faced ragamuffin in The Parent Trap, observed the sartorial laws of Mean Girls and belted out the banger that is Ultimate from Freaky Friday when we’ve had a few too many glasses at happy hour.

So imagine our excitement when we discovered that a new show is bringing Lindsay Lohan back to our screens, where she truly belongs.

This time around, it’s a brand new MTV show, Lindsay Lohan’s Beach Club, which sees the star enter the hospitality business with the launch of the Lohan beach house on Mykonos, otherwise known as the Greek island of debauchery.

Judging by the first episode, which premiered last night on MTV, we’re in for a treat, as the reality show sees Lohan turn the cameras on the beautiful, self-obsessed staff of the beach house, while she graduates into her newfound role as a “boss bitch.” 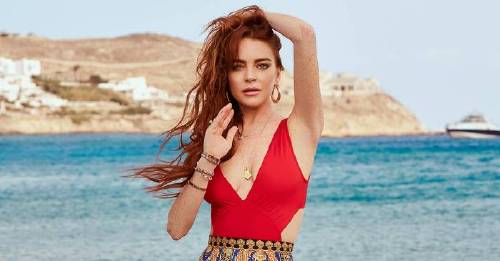 Any reality TV lover will know the drill: all Lohan’s staff (or “brand ambassadors”, as we’re told) are hungry for fame. But as the glamorous new recruits descend on the beach house to get drunk, jump in the pool and serve the occasional cocktail, Lohan is on hand to deliver some serious home truths. When a server is caught swimming in her lingerie, for instance, she dramatically compares the encounter as akin to “me going to meet Steven Spielberg in a bra with wet hair and wet bikini shorts.”

We all know, of course, that we’re not really tuning in to see how Lohan fares as a hospitality mogul, any more than we believe that she still wields A-list power like in her heyday. A scene where Lohan flicks through a portfolio of CVs to whittle down her list of potentials is textbook reality TV fodder. But who cares?

Lohan’s new mission is clear: to reclaim the spotlight. And it’s here that everyone’s fave mid-2000s starlet really excels as a reality star. Who doesn’t want some fun-in-the-sun escapism to see us through the winter months, especially when it comes in the form of a fiery-haired Lohan standing on the shore in floaty maxi dresses, delivering quality dialogue like “This is not a summer vacation. To make it, you have to be the best of the best”.

What’s even more satisfying, is that while her staff compete, unsuccessfully, to be the centre of attention (everyone’s an Instagram star in the making), Lohan rises as queen bee without having to do much at all. While her heavily-shadowed eyes are watching everything that goes down at the beach house, everyone else’s eyes are fixed on the Grecian entrepreneur preening, pouting and spouting bizarre one-liners like “I’m religious in the sense of meditation.”

Of course, Lohan has her fair share of naysayers. Predictably, there will be the same culture snobs who will denounce Beach Club as reality show trash from a lapsed actress in her twilight years – the same people who likely scoffed at Britain’s Love Island obsession.

But while Lohan may no longer be making Hollywood blockbusters, there’s no denying that her reality TV rebirth shows she’s still got star power. Resilient, liberated, and irrepressibly confident in her brand, Lindsay Lohan’s Beach Club has simply given us even more reason to love Lilo.

Jen Atkin shares, the hair recovery hacks, that will totally revive your hair, for the year ahead

Kim Petras opens up about being a groundbreaking transgender artist