We’re a few episodes into Riverdale‘s third season, and it’s appropriately bonkers. Betty’s mom is knee-deep in some bizarre cult called The Farm, Archie’s sweating it out in juvie, and a creepy game called Gryphons and Gargoyles is literally killing high schoolers.

But the most baffling plot point on the show right now has nothing to do with any of this. What I’m really mystified by is the fact that shirts have seemingly become optional for the dudes in this town.

Seriously, why is everyone so naked this season? OK, not literally naked, but if you’ve watched even one episode of season three then you know what I mean. It’s almost as if all the guys in Riverdale got together and said, “What if we just… don’t wear shirts anymore?” That, or Hiram Lodge somehow passed a law that says men can wear shirts for only two hours out of the day. Forget the age-old rule “No shirt, no shoes, no service” – the men of Riverdale are ushering in a new era in which T-shirts and sweaters are as necessary as Jughead’s ridiculous beanie.

In just three episodes – three – we’ve seen approximately 6 billion sweaty torsos for no discernible reason. Yes, there have been a few times when the Riverdale guys were exercising or swimming in dirty ponds and could justify not wearing shirts, but 99 percent of the time they’re just… chillin’. Half-naked. They easily could’ve (and probably should’ve) covered their impossibly ripped physiques but just decided, “Nope.”

Human beings have been getting arm tattoos since the dawn of time, and most of them wear shirts during the process, but not Archie! He’s allergic to V-necks now. Didn’t you get the memo? 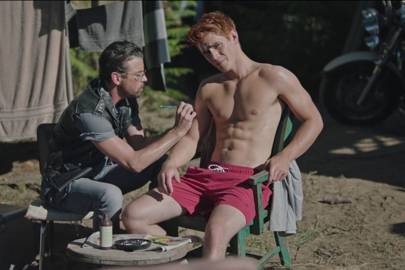 Sure, Jughead, Veronica, and Betty may be fully clothed for this car ride, but Archie obviously needed to soak up his vitamin D. 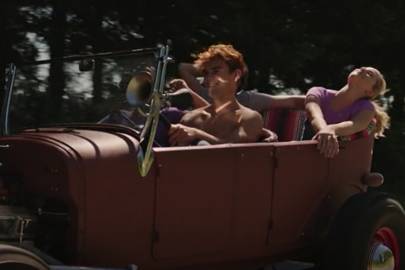 This Serpent has his shirt undone while walking with Jughead for no reason other than he has abs. 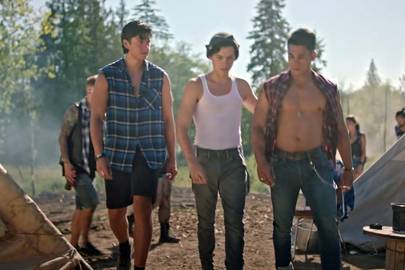 Want to start a brawl with the opposing side of town? Unbutton your shirt! That’s one way to make sure you keep your body safe. 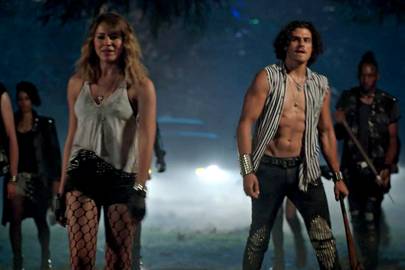 Riverdale is even making Archie’s jail thirsty. What the hell is up with this shot? Getting hosed down by scary prison guards shouldn’t be sexy, people.

Archie’s cellmate was just casually doing this when he arrived:

And don’t even get me started on the chiseled Fight Club subplot. I just…I just can’t.

The award for Most Unnecessary Torso, though, goes to Reggie (Charles Melton), for when he unpacked boxes in Veronica’s air-conditioned speakeasy sans shirt. Why? Who knows! Hot people do crazy things!

Melton himself even realizes the hilarity of all these thirst traps:
As does Madelaine Petsch, who plays Forever Queen Cheryl Blossom:

Her character’s also had some pointless thirst moments, like in Pop’s during episode one. Why would you wear a bikini top with a leather jacket?! Is she hot? Is she cold? It’s all so confusing and superfluous!

I understand that Riverdale is a “sexy” teen drama, but all of this is just way too on the nose. These youths are dodging serial killers and crooked cops every five seconds, for crying out loud! They don’t have time to work out to get abs like these. Are those Pop’s milkshakes laced with protein powder? I’m concerned.

T-shirts are not the enemy. They help protect against UV rays, keep you warm, and are also very stylish. Someone needs to let the Hot People of Riverdale in on this little secret.

Riverdale Season 3 is finally here, and it looks set to be EPIC