The findings come from Fidelity’s Unlocking the Power of Financial Advice report – the second report in Fidelity’s Women Money GET INvested campaign.

The damning conclusion is that we are lagging behind men– yet again- when it comes to our finances. But this time, it’s what we’re not doing. It found that 21% of men aged between 18 and 34 years old have sought help from a financial adviser, compared to that sad statistic that just 12% of women in the same age group do so.

It’s not like we don’t want help, but what’s curious about Fidelity’s findings is where we go to source that help. Spoiler alert: it’s NOT the bank.

Young women have sought help from a GP (35%), Personal Trainer (16%), Alternative Therapist (13%), and Mental Health Professional (25%) for their overall well-being ahead of getting support from a financial adviser (12%).

New statistics from Fidelity International show 47% of young women have had their mental health affected by financial worries. But only 12% would ask for help from a financial advisor. 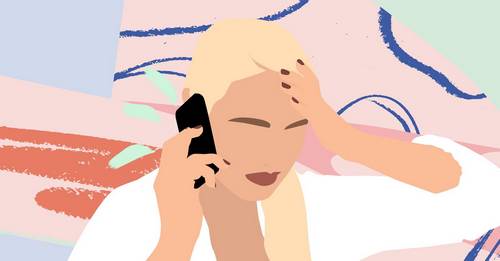 We’re not exactly worrying for nothing, either. Not only are we suffering from a gender pay gap, we are stuck in a pensions gender gap too, with women in their 60s having an average of £100,000 less in their pension than men. Plus, because 2020 has been such a banner year for everyone; women are also disproportionately affected by COVID-19, accounting for 78% of related job losses.

So, why is it that- with all reasons screaming at us to get some help- we are not doing so?

“There are a number of barriers preventing women from accessing financial advice. For young women in particular, it tends to be the case that they believe they don’t have enough wealth to speak to a financial adviser. In fact, as part of our study, we found over a third (37%) of women felt this way,” she says, “Most women on an income of less than £50,000 cited the cost of financial advice as the reason why they believed it wasn’t for them – a real Catch-22 situation as this perception denies them the opportunity to strategically grow their wealth in the first place.”

So, we’re clearly stuck in a cycle that perpetuates both our feelings of financial inadequacy in terms of understanding and capability and- of course- our actual wealth. Not investigating our money and asking for help with it, is having a knock-on effect on our financial health long term.

Jackie says that it is imperative that, while financial advice is not a silver bullet, women should be aware that not getting the right advice at crucial moments in their lives – divorce, illness, a family death- can carry huge financial repercussions. This is when advice can be vital.

“In addition, having appropriate financial advice and a knowledgeable, trustworthy financial adviser plays a key role in women feeling comfortable with investing,” Jackie observes, “This is of paramount importance for women in order to secure a comfortable retirement. Indeed, we found 20% of women who had sought advice felt better prepared for their retirement. However, as women are typically more aware of the risks involved with investing, and often shy away from it for fear of losing their hard earned savings, discussing these in appropriate detail with an adviser is therefore very beneficial.”

Though we may feel gun shy about approaching professional help for our money, do we not also feel sometimes excluded from financial marketing? Isn’t investing disproportionately catering to men?

“What became apparent in our Women and Money Innovation Lab,” says Jackie, “ Was the fact that the language used to communicate why advice is key was problematic for women and failed to encourage them to seek advice on their own accord. Today, financial services are in danger of missing the point as men and women do not want to be sold to. Too often, people are encouraged to think their financial goals are not what they should be, potentially alienating someone from considering advice.”

With Jackie and her team tackling these very issues with their own campaigns and labs, hopefully we will see great changes for this issue on the horizon. Yet, as evidenced by these damning statistics, we need to speak up our financial needs.

As we at GLAMOUR have been saying for months: we need to talk about money. Just don’t forget you also need to talk to the right person. Seek professional advice, you may unlock your financial potential…

The post lockdown party is here…so why aren’t we happy about it?