It was 2017 when I became increasingly obsessed with all things autumn. Sick of the summer heat and longing for crisp days with the slightly-warm-sunshine peeking through the clouds, I wanted late summer more than ever before.

My obsession grew from the feeling that autumn invokes when you’re wading through crunchy leaves in your favourite boots while wearing your favourite roll neck and skirt combo, before stopping for a coffee as the leaves fall around you down from a tree.

Well, I’m one of them. I know all too well just how addictive that first sip of a Pumpkin Spice Latte is, and how deliriously fun it is to spend hours on your Halloween makeup – and I’m clearly not alone. From PSLs, to pumpkin spice candles, cinnamon buns and scary movies, it’s safe to say this autumnal craze is going nowhere. 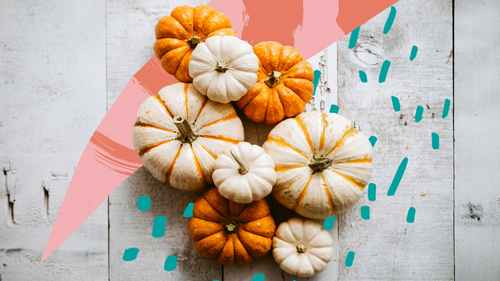 I soon became swept up with the entire season and would start planning ahead months in advance (I even started my own themed Instagram account, which is either a good thing or slightly embarrassing, or maybe both). I scoured the shops for anything that had an ounce of autumn as soon as the end of July loomed, but British shops were bare. Popular department store TK Maxx was the only place that I could find autumn-themed items like candles, coffee syrups and ornaments – but that still wasn’t satisfying my out-of-control obsession. In letters, my pen pal in America would describe to me what her autumn was like in Maine – how the shops were strewn with autumn and Halloween decor and how the entire season was one massive event in the US. I was jealous.

Fast forward to 2021, thanks to millennials, gen-zers and Instagram, British shops are now picking up on the popularity of autumn. Stores like Next, TK Maxx, Primark, Anthropologie and Very, as well as small businesses on Etsy and Not On The High Street, are cashing in on the high demand seasonal product that they’re experiencing.

You only have to walk into your local department store these days, track down the homeware and you’ll be met with an array of pumpkin spice, farmhouse cider and falling leaves scented candles. Alongside the candles there are now masses of pumpkin ornaments, candle holders, mugs, salt and pepper shakers and pretty much anything else you could want for.

Speaking to Liam Pitts, a 27-year-old PR executive, we discovered that it’s not just stereotypical millennial women who like all things autumn. “I enjoy bulk-buying candles, having an excessive amount of throws on the sofa and getting new chunky knit jumpers,” Liam told us. A keen devourer of PSLs, Liam even referred to himself as the ‘pumpking’ before saying that he’d happily have it ‘pumped into his veins’: “There’s something so warming and comforting about pumpkin spice, I wish it was available all year round.”

The obsession with all things autumn and Halloween has meant that businesses, small and large, have seen a massive rise in the popularity and sales of their seasonal goods. Rachael Hill, a millennial and small business owner from Kent runs the Etsy store Rachael’s Handmade Life. She saw a rise in popularity of pumpkin-themed products since she started selling autumn decorations earlier in the summer.

Am I the only person feeling guilty about going out?