There are, obviously, a lot of backyards in Los Angeles, but the one belonging to Whitney Port and her husband, Tim Rosenman, might be a contender for one of the best.

With sweeping views of the city, separate areas for poolside lounging and al fresco entertaining, and a large, verdant eucalyptus tree, the surroundings feel more like Savannah than Studio City. But even the meridional yard didn’t quite sell Port on the fixer-upper home the first time she saw it. “I knew that it had a lot of potential, but I was six months’ pregnant, so I was very scared for all the work that we had to do,” she admits.

The house, which was built in the 1950s, had only one previous owner; a renovation was imperative. But the allure of its oversize lot and one-story layout proved to be more powerful than the couple’s fear – especially with a baby on the way – of remodeling. Their previous house, a three-story loft in Venice, was “all open and had no doors,” Port says. “We just felt it wasn’t the right environment to bring a baby home to.” 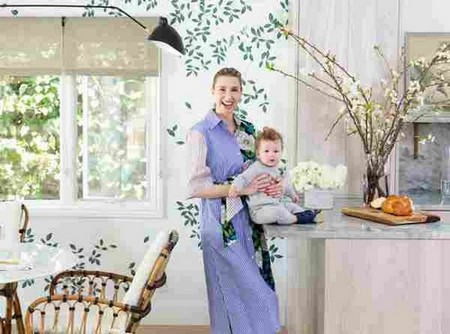 The couple moved in on July 2017 – just a week before their son, Sonny, was born. And while they completed his nursery and laid down hardwood floors before their determined move-in day, they opted to wait on other renovations until the little family unit was more settled. “We’re trying not to be too hard on ourselves to get it all done in the first year of Sonny’s life,” Port says. The couple also enlisted the help of interior designer Marie Flanigan, who has overseen both the interior decorating and exterior remodeling. “I relied on her so much to keep me sane throughout the whole process,” Port admits of Flanigan, whom she discovered on Instagram. Flanigan, of Marie Flanigan Interiors, was also pregnant at the same time as Port, a bond the two women shared.

The most recently completed project is the kitchen and dining area, a mix of traditional farmhouse aesthetic and midcentury modern. “Timmy comes from the East Coast and his mom’s style is very ‘East Coast–country’; that’s what he leans towards,” Port explains. “I’m a little more bohemian-eclectic, with a little hint of modern. All of those things combined make up our style.” The kitchen is the epitome of California chic: Light streams in from an oversize window, illuminating floating shelves and countertops made out of Arizona quartzite, complemented by sleek, light oak cabinets.

Adjacent is the breakfast room, an equally sun-dappled space with bespoke wallpaper from Gracie Studio. “Whitney’s very fashion-forward, very modern,” Flanigan says. “I wanted to take an antique chinoiserie panel and modernize it. Instead of the typical landscape scene, we did these blowing leaves throughout the room.” Port also requested the addition of seven hand-painted hummingbirds, to represent her siblings and parents. “My father passed away five years ago and we always say that we think he’s a hummingbird because we see them so often,” she says. “I thought it would be special to have some painted on the ceiling. I hope that when we do eventually leave this house, I’ll be able to take that paper with me!”

Although there are decorative flourishes like the wallpaper and layered rugs under the dining room table, Port’s ultimate goal was to pare down her decor. “My previous two homes were just filled with stuff,” she says. “I had huge gallery walls and lots of knickknacks and prints everywhere. I decided that I wanted to completely change my aesthetic for this house.” To achieve this streamlined look, Flanigan used Portola Paints White Cliffs for the interior walls and kept the color palette to blues and greens, “bringing the beauty of the outdoors, in,” the designer says. And with a yard like that, there’s no reason not to. 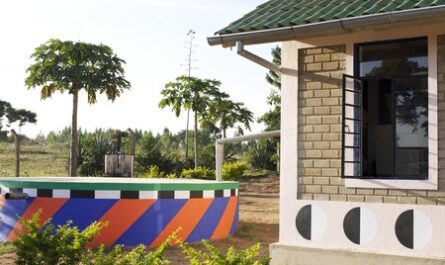 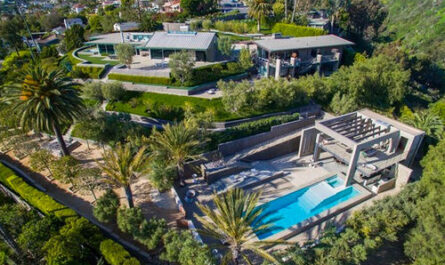