Whether or not there is bad blood with the Quintanilla’s in regard to the series, Pérez has rebuilt his life since Selena’s passing and continues his passion for all things music.

After Selena’s murder, Pérez was depressed and turned to drugs and alcohol, which he wrote about in his memoir. Today, he is healthy and well. He married Venessa Villanueva in 2001 (divorced in 2008), and they have two children. On the music front, he formed the Chris Pérez band in 1999 and won the best Latin rock, urban or alternative album Grammy in 2000 for their album Resurrection.

The band split up that year, and Pérez has since then worked with other members of Selena Y Los Dinos on reunion material, and with his latest effort the Chris Pérez Project.

An important part of Netflix’s Selena: The Series is her heart-wrenching romance with her band’s guitarist Chris Pérez, their secret relationship, and their eventual marriage which lasted three years until the singer’s untimely death. Although Quintanilla’s father famously disapproved of their relationship, Pérez had a hand at the band’s hits, collaborating with Selena’s brother at songwriting, and undoubtedly fell deeply in love with the late icon. 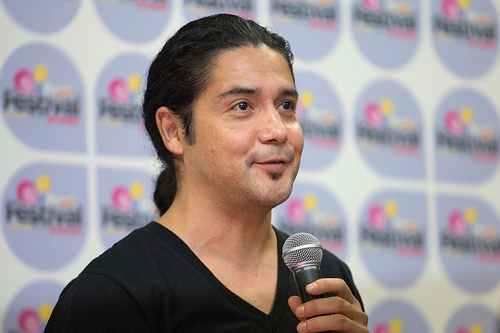 But fast forward to today, and Pérez isn’t nearly as close to the family as he once was – reportedly, to the point that he had no idea the new Netflix series was being produced. In fact, on his Instagram, Pérez posted a photo of actor Jesse Posey who plays Pérez in the series, with the caption: “For the record, never met him, haven’t seen the script, and I have NO idea what is going on… but, I’d love to find out.”

Pérez published his memoir To Selena, With Love in 2012, which he says the family approved of after its release. In 2012, Pérez said that he was still close with the Quintanilla family, who he said approved of his book, but only after its release. The guitarist famously loves anything hot or spicy (featured in Selena the movie) and actually released his own hot sauce line called Pérez Pepper Sauce.

Although Pérez’s initial Instagram posts about the show might have hinted at a feud, the musician is quick to note that he is extremely supportive of the series and the Quintanilla family. On an Instagram post on Dec. 3, Pérez wrote: “I loved her music even before I joined the band. I was intrigued by the fact that her brother had his name on everything as producer.” He continued, “Keyboard player Ricky Vela was my hero as far as musicianship goes. Her dad ran some amazing sound when I went to see them at an event in San Antonio. I learned so much by taking on their guitar player Roger Garcia’s parts and doing my best to stretch it even further. They had a girl drummer Selena’s sister that laid it DOWN.” Pérez ended his post by clarifying that he “will forever respect the band and the people involved in it,” and that he hopes people “enjoy this series.”

As he told Good Morning America, Pérez continues to carry over Selena’s legacy and believes that “out of everybody that I’ve known in my life, I don’t know anybody more deserving than her.” Marking his support for retelling Selena’s story even further, the guitarist said, “The story keeps getting passed from generation to generation, which is amazing to me.”