The teacher of a child who was teased for her short hair chopped off her hip-length locks to be “twins” with her student.

Five-year-old Pricilla Perez, a student at Meador Elementary School in Willis, Texas, was unhappy with her recent haircut (due to a severe case of lice), according to Houston television station KTRK. Her kindergarten teacher Shannon Grimm saw her unhappiness.

“Priscilla started wearing a hat to school that covered her neck and ears and she refused to take it off,” Grimm, 31, a mother-of-three, tells Yahoo Lifestyle. “I didn’t push the issue, but after a few weeks, she felt comfortable saying that she wanted her long hair back.”

When students started calling Pricilla “boy,” she felt worse, often crying and losing focus in school. Grimm and Pricilla’s mom were concerned, but their ideas didn’t work. “We had classroom discussions about how girls have short hair and boys have long hair and I showed them photos of movie stars with different looks,” Grimm tells Yahoo Lifestyle. “It wasn’t sinking in.”

Shannon Grimm, a kindergarten teacher in Texas cut off her hair in solidarity with a student who was teased for her haircut.

Grimm thought about Pricilla throughout winter break and one morning, she had an idea: Cut off her hair – a scary thought for Grimm who took pride in her long, brown style. “I’ve never had short hair, and I stressed about it for two weeks before making a decision,” she tells Yahoo Lifestyle.

On January 4th, Grimm invited a hairstylist friend to her home. “I didn’t want to be surrounded by mirrors in a salon,” she says. “I told him to keep going, even if I cried.”

The kindergarten class loved their teacher’s new ‘do, especially Pricilla, who excitedly ran off the school bus that afternoon yelling, “Mom, Ms. Grim cut her hair!” The teacher also bought matching bows for her and the child – who call themselves “Tinkerbell” – so they could style their hair together. 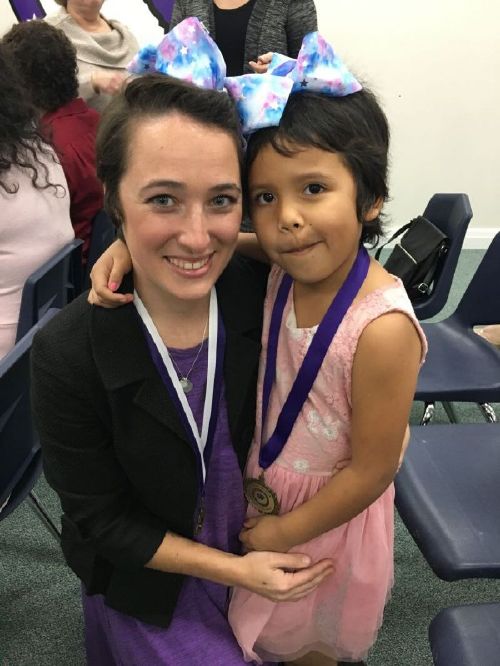 “Pricilla is a different person now and the kids love her hair, too,” Grimm tells Yahoo Lifestyle. She’s promised to keep her hair short this year, or at least until Pricilla’s grows out.

In February, the teacher nominated Pricilla for the school district’s student of the month award, but during the Monday ceremony, she received a surprise “hero medal” from the girl. “Now we have matching awards,” says Grimm.

Pricilla’s mother Maria Vasquez tells Yahoo Lifestyle that Grimm’s thoughtfulness brought her to tears. “I was shocked, I was crying, I couldn’t believe it – she did something I wouldn’t have the guts to do. I will never forget that.”