But has cancel culture gone too far? Is our reaction to tweet “CANCELLED” at anyone in the public eye that makes a mistake damaging our cultural landscape? And, more importantly, does it *actually* work?

Cancel culture has its place, it helps to call-out and remove problematic people from mainstream culture and addresses the idea that not everyone deserves a platform. Alleged abusers R Kelly and the late xxxTentacion are examples of cancel culture at its best: the internet rallied people together to spread awareness, boycott their music and attempt to remove the power that has allowed them to prosper.

It seems like tweets are dug up every day as proof that your latest celebrity favourite isn’t as great as they seem. There are frequent viral posts calling out Jameela Jamil for centering herself in the body positivity movement, or a video of Gina Rodriguez being barraged with hate.

Don’t get me wrong, these women aren’t perfect. They have some learning to do, they are often misguided, but do they deserve to be #cancelled? Or is this another example of those who have the most privilege also having the most immunity, and avoiding accountability? I think so. 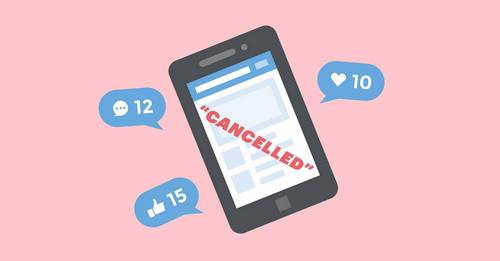 It seems that only the very worst men get cancelled. The literal sex offenders, and even then they have an army of male supporters reminding us that there are “two sides to every story”. The middle-ground men, the toxic but not criminal men, get a free pass. But this isn’t the same for women. It’s women like Maya Jama and Jameela Jamil, who have been subjected to cancel culture, that embody this issue.

As a whole, both these women do far more good than bad. Digging up tweets from 5 years ago isn’t helpful, because didn’t we all say something stupid as a teenager? If you were catapulted to fame, would you not have something cancel-worthy in your past? This rhetoric is toxic because it doesn’t allow for growth, for education, for sincere apologies. If the energy spent berating women who, in my opinion, are trying their best but messing up in a very human way, was channeled into boycotting men in positions of power that are messing up in a very permanent and evil way, the world would be much better off.

Look at Chris Brown. He was found guilty of assaulting his then-girlfriend Rihanna in 2009 and his ex-girlfriend Karrueche Tan was granted a five-year restraining order against him in 2017. He’s been arrested for assault and battery on numerous occasions, and yet, he continues to enjoy success. His last single, Freaky Friday, reached number one in countries around the world.

The internet has lost its ability to see grey areas, sometimes, a mistake is just a mistake. The more we condemn everyone who messes up, the less our words mean. If everything is cancel-worthy, when it comes to actually cancelling someone dangerous, the momentum is lost and people like Chris Brown come away relatively unscathed. The way we hand out ‘cancels’ so freely contributes to the comeback culture that’s developing, we are accidentally making martyrs of the people we intended to cancel. Kevin Hart has had more comebacks than The Sugababes, at this point.

Meaning, importantly, cancel culture often doesn’t actually *DO* anything, anymore. Last week, the story of Caroline Calloway published on The Cut took the internet by a storm; to think, two weeks ago, many of us had never even heard her name. Caroline, for those who aren’t familiar with the tale is an Instagram Influencer who got a six-figure deal to write a memoir that never happened, and sold tickets for ‘creative workshops’ at $165 a pop. In short, the internet labeled her a scammer and narcissist.

Despite an echo chamber of people screaming “cancelled” at her on Instagram, she’s got more followers than before, and The Times just published her side of the story. If Cancel Culture is meant to banish people into obscurity and take away their success, this outcome is the polar opposite of what was intended – someone relatively unknown has actually become famous *for* being cancelled.

I don’t think cancel culture is bad, but I think it has become diluted. Rather than cancelling the likes of Caroline Calloway who is, bluntly put, just a bit of a d*ck, we should save our condemnation for those who *really* deserve it. I’m looking at you, Chris Brown.