Cressida and Johnny met on Bumble in March. They didn’t mean for their third date to last nine months as they shacked up for lockdown but-….”oh well- isn’t love funny? No, no you tell it Johnny, oh alright then… *giggles**” Now they are facing their first Christmas together.

They have decided to merge families in Johnny’s second home- a delightful cottage just a stone’s throw away from Babington House or, as they affectionately call it “old Babbers.” Johnny roasts a turkey whilst Cressida makes a bulgur wheat bake that everyone politely pretends doesn’t taste like recycled cardboard. Cressida’s parents get very nervous and keep wondering why on earth they have to spend Christmas with a relative stranger in Somerset as Johnny’s father gets drunk and persistently calls Cressida by Johnny’s first wife’s name.

“To Johnny and Perdita!” he bellows, before falling asleep before Christmas pudding is served.

This Christmas, everything feels a little off, from socially-distanced crackers to furloughed reindeer. So whether you’re trying to make your 2020 feel just the same, or embracing the New Normal, chances are, you feel like – or know- one of the below… 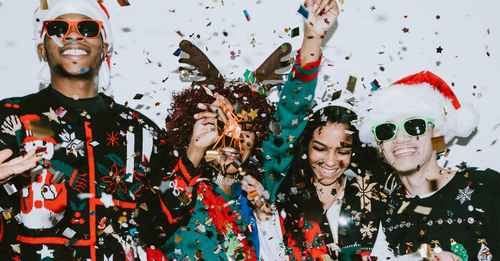 Amy can’t go anywhere this Christmas. Her parents are shielding, her friends have all gone home and she broke up with her boyfriend during the first lockdown because apparently all it took was the knowledge that he even *wanted* to learn all the TikTok dances to send her over the edge. She’s staying in her flat in Glasgow but everyone has promised to bring Christmas to her. She wakes up at 9am and has morning stockings with her parents (her mum had hers sent over by DHL on Christmas Eve) over FaceTime.

Next she makes a mimosa for a 11am boozy brunch zoom with her two best friends, Aleesha and Briony, before she gets dressed and pops her M&S Christmas meal for one in the microwave. She eats it with her whole family over video.

Her granny falls asleep, her uncle Jeremy starts telling several unsavory stories related to Brexit and a sex party he heard his local MP goes to, while her cousin Monica tries to get them all to do an overly elaborate quiz that descends into a drunken shouting match of “Grandpa! You’re on mute!!” There’s always next year, thinks Amy, as she opens up another bottle of Prosecco.

Lydia and Abeo didn’t want to make a fuss this year. “Just a low key Christmas,” they said. Lydia normally throws a Christmas Eve party that would make Kris Jenner blush, but this year it was just -”fifteen friends, five crates of Bollinger and a sushi-making station.” Simple. On Christmas Day, they erect an outdoor cinema showing Love Actually with heaters, cashmere blankets and fake snow in their five acre garden, serving hot chocolate with marshmallows as the whole family (grandparents and all) wear matching, monogrammed Liberty pjs. But it’s – “All just for the kids,” says Abeo, “It’s their day after all.”

The F**k This Holidayers

Britta and Tarek have had enough. They had to cancel their May wedding- and their October redo. They lost thousands in deposits as their caterers and venue went bust. Britta got Covid in July and now haslong Covid. Back-to-back zoom meetings all day have given them both migraines. Britta just wants to sleep all day. Tarek was furloughed. Twice. The pair decided to hell with it this festive season and booked an all-inclusive trip to the Maldives. They spend Christmas Day on a hammock overlooking azure waters, drinking mojitos and only slightly worrying about what they are going to do without this hefty chunk of their life savings. “Don’t worry,” says Britta, “2021 will definitely be our year.”

Shannon’s mum Janet has invited the whole family over for Christmas Day; grandparents, aunts, uncles, kids and – for the first time- Shannon’s girlfriend Lisa. “I’ve got a marquee,” she stage whispers down the phone, as though she’s just stockpiled illegal drugs. When Shannon and Lisa show up, they discover she has indeed affixed a giant wedding marquee to their semi-detached Newcastle house for al fresco Christmas lunch. It takes up most of the garden, with plastic seating and blue taped crosses on the floor to denote social distancing.

But Shannon’s grandad struggles to get through the gap between the wall and the marquee, getting his walking stick stuck in one of the ropes, tearing half of it down with him. Uncle Dave thinks the blue crosses are a game of Twister and makes offensively forward comments to Lisa, while aunt Tracy accidentally breaks the heater, meaning everything- from the turkey to the great aunt Grace, who hasn’t said anything for a very long time- goes cold. Meanwhile, Shannon’s 92-year-old granny- who has just had the Covid vaccine- gets drunk on Tia Maria and starts singing Prodigy’s Smack my B***h up. “So….this is my family,” Shannon tells Lisa.

Lucy is an A&E nurse and is working Christmas Day. She worked through Covid and saw her fair share of terror, pain and heartache before catching it herself in April and quarantining at home. It was nice hearing the claps every Thursday at 8pm from her sick bed, but she wished she could be back on the wards actually doing her job.

Of course it would have been nice to be with her family this year, but she wonders if it would have been worth the risk. Her brother has asthma, after all, and she doesn’t fancy trying to social distance from her deaf granny June who just turned 88.

No, Lucy actually feels more festive in the hospital. Derek from the cleaning staff dresses up as Santa, Nogia puts on Christmas music and the two of them wrap tinsel around their lanyards. “In fact”, Lucy tells, Brian, aged 28, in the ward for slicing his hand open cutting parsnips, “there’s no place I’d rather be this Christmas.”

Poorna couldn’t get home to her family in Mumbai for Christmas, Jenna’s parents are both shielding in Cardiff and Tina hates Christmas anyway, her family somehow always seem to make her feel terrible about herself and so she’d rather not subject herself to the torture this year. Instead, the uni flatmates decide to stay in their London bubble. They book an indoor table at their local gastro pub for a Christmas dinner they didn’t have to cook themselves.

They make cocktails at home and compete for the best Emma Corrin as Princess Di impression when they drunkenly watch the Queen’s speech. They pull crackers and tell bad jokes, they crank up Mariah Carey and dance till they collapse; sweaty and laughing into the Ikea sofa they put together themselves a year ago when they moved in. They zoom Poorna and Jenna’s parents.

They zoom Tina’s parents and collectively pretend to have connection issues. “Terrible WIFI!” they mouth, before they snap down the laptop and snuggle up in the pyjamas to eat Quality Street and watch Normal People again. “This is so much better than being with my family,” Tina announces sleepily, as they all agree they may just have become one.

Why Brexit will be a disaster for millennials and their finances

Has Keeping Up With The Kardashians been a positive or negative influence on society?