Did she feel as though the prison officers were looking out for her? In short, no. “I actually remember one time an officer took issue with the fact my cellmate gave me a couple of extra apples because it was against the rules,” she says.

Nutrition aside, for Anna, one of the most difficult things was having to go through prison staff to see a midwife or doctor when she had any concerns. This is an issue, Dr Abbott explains, because they are not medically trained to deal with pregnancy or birth. “It’s unfair to put them in positions where they are forced to make clinical judgements as to whether someone receives medical attention or not.” For this reason, women should always have a direct line to maternity services, as they would in the community, says Dr Abbott.

Another issue which sometimes prevents women from getting timely medical help is the lack of prison staff available to take women to the hospital – something which Anna experienced firsthand. “There was one instance when I was heavily pregnant and I was having reduced movements. I was extremely worried so I spoke to the officers and said I couldn’t feel the baby move,” she says. Anna was told they couldn’t find a second officer to escort her to hospital so she had to wait until the next day to get checked out. Naturally, she was terrified. 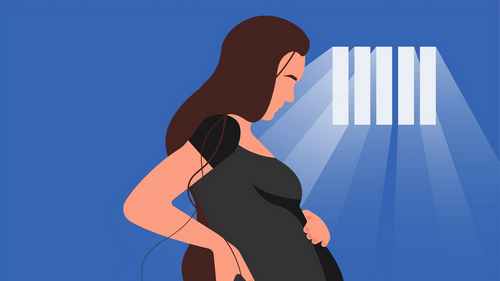 Now, Anna feels it’s important to speak out about her experience so that hopefully, other women won’t have to go through the same thing. She says it was traumatic and will stay with her forever. “It doesn’t end when you’re released, it’ll be something that we deal with for the rest of our lives.”

So, what is the alternative to prison sentences for pregnant women? Dr Minson feels it’s important to point out that 77% of women are in prison for non-violent crimes and 62% of women have been sentenced for less than two years, meaning their crime is not serious or violent and they’re not a risk to the community. The trauma they experience is lasting, however. What’s more, many women in the criminal justice system have convictions linked to poverty and have been victims of crime and abuse themselves. “Prison is not the right place for these women,” she says.

Given that community sentences are more effective in reducing re-offending rates while short sentenced prisoners have the highest reconviction rates, it can be argued that that short sentences serve no useful purpose, particularly when you consider the risks posed to mothers and their unborn babies in the prison system. “Instead, pregnant women could be given a sentence in the community which will restrict their lives, have conditions which they must fulfil for unpaid work or training, but will allow them to safely deliver and care for their children,`” offers Dr Minson.

Anna agrees that community rehabilitation is the only option to keep women and children safe, physically and mentally. “Having my second son in the community helped me to realise how much was taken away from me and my first baby,” reflects Anna. “If I was at home, I would have had direct access to medical professionals, I would have had the support of my family and friends and I wouldn’t have had the constant stress and worry of being in an unsafe place.”

“I literally had no care, no support, no nothing. No pregnant woman should ever have to go through that.”

I can’t have sex without pain. I feel unloved and unwanted

You’re not alone – health anxiety is soaring post-lockdown, so here’s what you need to know

It’s the most popular method of contraception in the world, so why are so few women getting sterilised in the UK?