During this crazy time, you’ve also found this crazy level of fandom obsession and fame with Never Have I Ever, how’s that been?

Speaking to GLAMOUR’s Entertainment Director Josh Smith during Happy Hour – our weekly Instagram Live chat show which airs on @glamouruk every Tuesday night – rising star Maitreyi Ramakrishnan opened up about the importance of representation, what she hopes for Devi in the future of the Netflix smash series Never Have I Ever and what it’s like to get advice from Mindy Kaling.

Somebody the other day called me Corona Famous. And… should I be offended? But yeah, it’s crazy. It feels surreal because I don’t get that face-to-face hype. The show didn’t get a premiere and I’m not with my castmates to vibe off of each other. I’m still just at home and this is all happening. 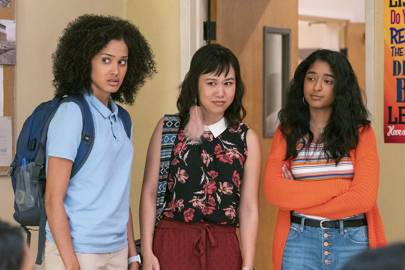 Plus, this is basically your first role. You were plucked from 15,000 applicants to get this role.

It’s surreal to say my first role is this – an amazing show that’s all around the world with an amazing cast who’s honestly like a second family to me, and with Mindy Kaling and Lang Fisher who are like my fairy godmothers.

What kind of advice have they given you throughout this?

The biggest piece of advice they’ve given me, that I’ll always take throughout my life, is to stay authentic and don’t try to be anyone else. Because I’ve done such a good job so far being myself. So why would I want to be anybody else, right?

There’s so much rich material in this show. For you, what was the most pressing conversation it raised?

Definitely the conversation around mental health. Also finding your own identity within your culture. That was something that I could relate to because growing up, I wasn’t 100% like, “Yeah, this is my culture. I feel confident.” When you grow up sometimes you don’t really know where you sit with a culture. I knew I was Tamil Canadian, but I didn’t really know what that meant. Now I’m proud to say I’m Tamil Canadian, but before you would just say it.

Do you feel like this show has helped you accept yourself even more than before?

Actually, yes. But I don’t think I would’ve made the same mistakes as Devi. Devi makes pretty dumb mistakes.

We’re all a mess at times. And it’s fine, it’s human, it’s OK. And that was something that I realised after I watched the whole show: “Devi, you are such a mess, but I’m still rooting for you at the end of the day.”

Would you say that you are now more your own best friend than you have been before? 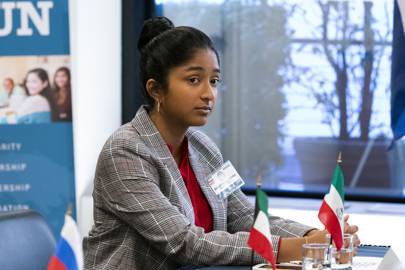 You know when you’re happy, let’s say you’re at an amusement park and you’re happy and you’re having fun, right? But then as soon as you get off that ride, you’re still in the amusement park. But you still have your responsibilities, those self-doubts. For once in my life (when I was on the show), I didn’t have that. I just had happiness. I was on a professional rollercoaster that never stopped. And I freaking love rollercoasters.

So yes, I definitely just love myself more. And cut myself more slack.

The number of messages I see from people saying “Oh my God, I feel so seen. This is amazing, for once I feel represented,” is incredible. But the reality is the story of Devi is only one story. She’s only one girl. She can’t possibly represent the entirety of the South Asian community. And we can’t stop at Devi, can we? We can’t be like, “OK, we have Devi, no one else now.

As much as I want to inspire fans to go chase after their dreams, I hope I can inspire a director or producer or creator or writer to realise they can do this. And they can make a hit. Adding minorities and realistic representation will not set your show back. It will only enrich your show.

The Mean Girls Musical is coming to the big screen