“We’ll miss Simon’s presence onscreen, but he will always be a part of the Bridgerton family,” it continued. “Daphne will remain a devoted wife and sister, helping her brother navigate the upcoming social season and what it has to offer – more intrigue and romance than my readers may be able to bear.”

Regé-Jean took to the comments to share his love for the show: “It’s been an absolute pleasure and a privilege! Joining this family – the connection on and off screen, with our cast, our crew, all the incredible fans, has been like nothing I could have ever imagined – the love is real and will just keep growing.”

The show’s creator has also spoken about the Duke’s departure and what she thinks of Regé’s decision to leave.

“I was really shocked [by the reaction], because usually that happens when I’ve killed off somebody that’s been around for a while,” Shonda Rhimes told Vanity Fair. “Like, we didn’t kill him, he’s still alive!” 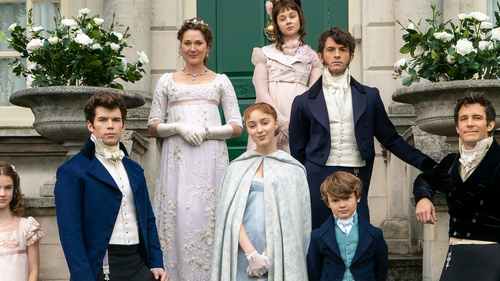 She continued, ” [Regé-Jean] is a powerful, amazing actor and that meant we did our job – every season, our job is finding the right people and putting together this incredible, world-shifting romance,” she continued.

“I don’t know that I expected this much of an explosion, given that every book [in the Bridgerton series] is a different romance. What would be the ever-after of this combo? I mean, really: What would Regé-Jean do, you know what I mean? We gave them their happily ever after. And now we have this next couple coming. And so yeah, I was like, whoa!”

She added that he’s been invited for a season 2 cameo so let’s cross everything.

It’s also been confirmed that Simone Ashley will play the lead in season 2, in the role of Kate Sharma, Anthony Bridgerton’s love interest. You’ll likely recognise her as Olivia Hanan, a member of The Untouchables in Sex Education (you know, the one that deep-throated a banana and threw up on Eric?)

The casting was first reported by Deadline, who revealed that ‘Ashley will play Anthony’s romantic interest, Kate Sharma. Newly arrived in London, Kate is a smart, headstrong young woman who suffers no fools – Anthony Bridgerton very much included.’

We also know actress Melissa Advani is set to star as Lady Eaton in the second series. She’s starred in a number of short films including Everywhere, Vicente and the 2014 horror film Bloodless.

We can expect season 2’s love story to be just as intoxicating as the first. Speaking on Today with Hoda & Jenna, Van Dusen added: “We have a bunch of new characters we are going to be introducing. Anthony is going to have a love interest next season, and I think it’s going to be as sweeping and moving and as beautiful as viewers of the first season have come to expect from the show.”

Amid Rising Violence in Afghanistan, Women Are Exceedingly Vulnerable