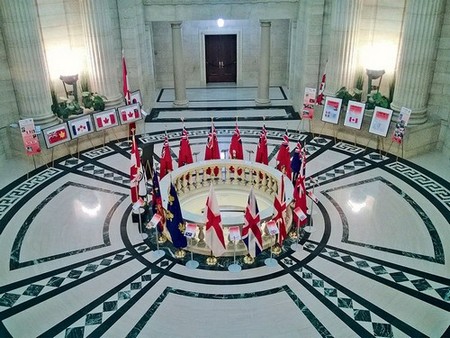 Thought to be the second largest collection of flags in the country, the Canadian Flag Collection in Argyle, Manitoba, boasts 1,300 flags.

By Shayne Campbell, Our Canada

Inside the Canadian Flag Collection in Argyle, Manitoba

As I pull up to the small post office here in Argyle, Manitoba, to get my mail, our friendly postmistress greets me. Along with my personal letters, she tells me that the museum has also received two packages, and smiling, inquires where these two are from. With a shared sense of local pride, I reply that one comes from a private collector in Ontario and the other from a small town in British Columbia. You see, over the last decade, our local museum has been receiving flags from across the country and even from some of Canada’s embassies around the globe. With more than 1,300 flags in our permanent holdings, I believe that our collection is the second largest in the country, behind only that of the Canadian Museum of History in Gatineau, Quebec.

My hometown is officially labeled as an unincorporated village – two municipalities divided by the Prime Meridian of Canada govern the region. It is this very line that was drawn by early land surveyors in the 1870s that divides Canada into east and west, creating the section, township and range system that has been used since the first homesteaders arrived. Although the line seems to be a great divide, the two halves of my hometown have always worked together, through thick and thin. It was in this spirit of community and volunteerism that my museum was born.

(Shown above: Flags from Settlers, Rails Trails on display in the Manitoba Legislature.)

Bunnock 101: A Beginner’s Guide to the Best Game You’ve Never Heard Of

The 10 Best Foodie Cities in the World