When urban planner and blogger Karst Rauhé was growing up, he redid his bedroom ten different times; thrift shop finds and IKEA furniture were constantly cycling in and out as he rejiggered things.

Fast-forward a handful of years and not much has changed, even though the 25-year-old now calls a 269-square-foot studio apartment in Amsterdam home.

While the big furniture stays put, Karst admits to switching the little stuff around often. As in, every single week. “I think I just get bored of how it is,” he says.

Just since we shot his home a few weeks ago, there’s a new dining chair in the mix and plans to reupholster the sofa in hot pink. The constant state of flux makes it easy to imagine how different the place must have looked last year, when Karst moved in. “All the walls were grimy and brown, and all the woodwork was in bad shape,” he remembers, but the location and the balcony sold him on it.

A coat of white paint on everything – moldings and door frames included – quickly fixed the dinginess issue. The real struggle ended up being how to arrange a bed, dining area, and sofa in one room. “The basic layout is the only way that it works. It’s, to some extent, how the previous renter had it,” says Karst. “When I signed the lease, I took pen and paper and wanted to make a new layout for the apartment, but after a few attempts, I came back to this one.”

The stunning balcony (with French doors!) that convinced Karst this was the place for him. 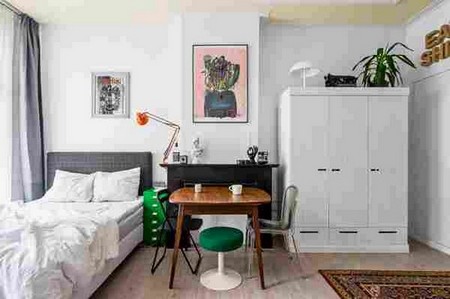 Karst downsized big time – he previously lived in a three-bedroom apartment – so he didn’t move with much. Just the basics, like his wardrobe. “Then I kind of started collecting,” says Karst. “What was great about that was when you live there, you feel what a room needs. That’s how I did it. When I felt like, Oh, I need a rug there, I went on Craigslist.” (Technically, he went on the Netherlands version of Craigslist, called Marktplaats.) Along the way, he DIYed a countertop (he’s got a knack for it), hacked IKEA furniture, and found some seriously great vintage things. Here’s the rundown.

Layering multiple rugs ended up making the space feel bigger: “First I had nothing on the floor, and it felt really small then. I thought to myself, maybe it was because it was all one room,” Karst recalls. “I needed to zone it out a bit. I started with a rug in the living-space area, and it really works perfect, so from there I went to buy the other rug. I also have my eyes on another one for the dining area.”

He nixed a matching dining set: An acrylic beauty from the flea market, an upholstered stool (also from the flea market), and a temporary folding chair all have places around the dining table. “A set of matching chairs would make it too impactful. When you pair different chairs, it makes it more playful, and I can grab one and put it beside my sofa. The stool is really easy for laying your feet on when you sit on the couch.”

His dream sofa is actually a daybed: “The first sofa touched the ground everywhere. It made the space look quite small, so I had two things in mind,” says Karst. “I needed something where friends could spend the night, and I wanted something that was lifted from the ground. I saw a daybed on someone’s Instagram, and I searched for it on Marktplaats.” Karst semi-reupholstered the mattress in a new fabric; the textile is really just pulled tight and stapled to a piece of MDF on the underside, making it easily removable.

He hacked his IKEA bed: Karst bought a basic upholstered headboard from IKEA – “I try to find deals that are good because my budget is small,” he says – then gave it a makeover by covering it in a grid-patterned charcoal fabric. “Beneath it is the original fabric of the headboard; I just folded it over it and pinned it,” Karst explains. This way, he can change it up whenever the mood strikes. “Right now, I took it off because I felt like it.” The only nightstand that could fit in that sliver of space next to the bed was this bright green filing cabinet, another IKEA find.

He DIYed the kitchen countertop, NBD: The first one was broken when Karst moved in, so he replaced it with a piece of inexpensive white laminate. (His fingers are crossed that the landlord won’t mind.) “My parents were always remodeling their place, and I always help them,” he says. “Then I moved into the place where I lived before here, and that had to be redone also; it was also a rental. It was kind of the same deal, where I had a lot of freedom to do things. So I got a lot of experience that way.”

The curtain situation took time: Slightly see-through red drapes were already hanging in the apartment when Karst arrived. “I lived with them for a month because I didn’t really know what I wanted. I wanted to have privacy at my bedside, but I didn’t want to block it off because the light that comes in from there is really needed.” Ultimately, he layered white sheers with luxe gray blackout curtains for the most flexibility. Each is hung on a separate track rather than curtain rods; those didn’t make sense here because of how close the windows are to the ceiling.

He fashioned a standing desk out of a bookcase: Rather than have storage in one place and a workspace in another, Karst combined the two in one IKEA Billy bookcase. He stuck corkboard on the back of the shelf where he puts his laptop so he can pin up inspiration or anything that needs his attention. 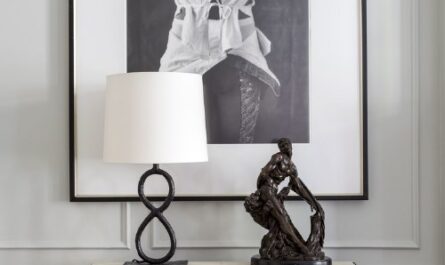 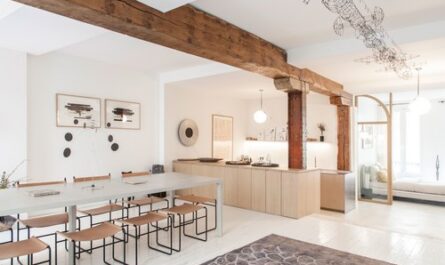 See How the Zeuxis Art Gallery Was Renovated by Batiik Studio 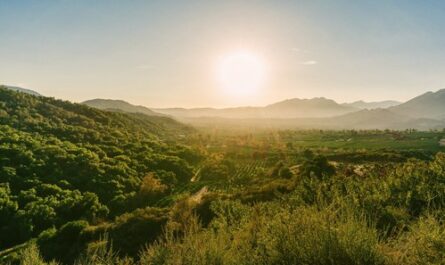 Ojai, California, Is the Perfect Destination for Design Lovers