Very little will stop you from junk food you crave – even an eye-watering price tag, a new study has confirmed.

As we all know, desire for a specific snack can be overpowering, especially if we are tired, hungover, dehydrated, or in a glum mood.

Now, neuroscience researchers at New York University have shown that even with the strongest psychological barrier in place – money – a craving tends to win out.

They found people cared least about money when presented with the prospect of buying higher-calorie, fatty and sugary foods like a chocolate bar or cheese puffs, compared to a relatively healthier snack like a granola bar.

The findings hammer home yet again that attempts to curb America’s obesity crisis will take far more than soda taxes and calorie counts, but the researchers insist this is useful insight for public health officials. 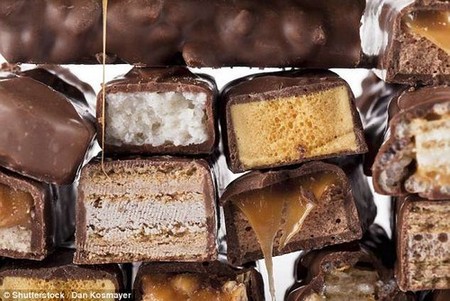 NYU researchers found people cared least about money when presented with higher-calorie, fatty and sugary foods like a chocolate bar, compared to a relatively healthier snack

‘Our results indicate that even if people strive to eat healthier, craving could overshadow the importance of health by boosting the value of tempting, unhealthy foods relative to healthier options,’ lead author Anna Konova, a postdoctoral researcher in NYU’s Center for Neural Science, said.

‘Craving, which is pervasive in daily life, may nudge our choices in very specific ways that help us acquire those things that made us feel good in the past – even if those things may not be consistent with our current health goals.’

To investigate how craving interests with different public health measures, Konova and her team gathered a group of 44 people who hadn’t eaten for four hours.

They presented them with 15 snacks, including a granola bar and a Snickers bar, and a $5 budget for each, and asked them how much they would pay for each one.

Almost without fail, everyone was willing to pay around $0.66 more for a snack after they had seen it. Their price point bumped up even further after the researcher asked them to describe it, and recall memories of it.

There was also a spillover effect, they found: people who had been exposed to a Snickers bar in the first round were then likely to pay $0.26 more for another kind of chocolate bar.

Interestingly, Konova noted in the study published yesterday in the journal PNAS, this was the case regardless of whether the person was hungry before the entire experiment.

‘In other words, craving Snickers does not make you hungrier; it makes you desire Snickers specifically,’ co-author Kenway Louie, an NYU research assistant professor, said.

And when it came to bigger portion sizes, their price point soared – often way more than it should do for a larger portion of the same thing.

‘It appears that craving boosts or multiplies the economic value of the craved food,’ Konova said.