The show which was set up by SiriusXM host Seth Rudestskey and his husband, James Wesley, has already featured the casts of shows like Young Shelton, in its daily live streams.

Desperate Housewives was compulsory and addictive TV viewing in the early Noughties with its OTT storylines, hot gardeners, backstabbing neighbours and of course, the on-screen sisterhood solidarity.

And now, the original cast are REUNITING this Sunday for the first time since it last aired in 2012 for a livestream episode of Stars in The House. It’s an online show that was created following the outbreak of the Coronavirus crisis in USA and in each episode, famous cast members reunite to perform a live version of a show in order to raise funds for The Actors Funds. The charity supports the education of actors and those out of work – which is a spiralling crisis as the entertainment industry is hit hard by the outbreak of COVID-19.

So, who will be back from Wisteria Lane? Well, so far the show has confirmed Marcia Cross, Vanessa Williams, Brenda Strong, Dana Delaney, and Eva Longoria will appear. 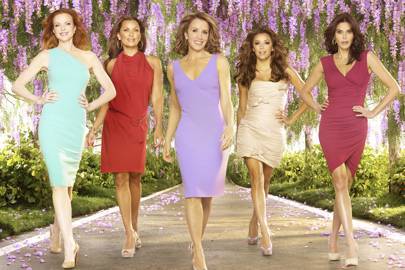 Unfortunately, thus far, two of the show’s key cast members, Teri Hatcher and Felicity Huffman have not jumped at the chance of rejoining the show which ended after 8 seasons of pure drama. However, the appearance of Felicity isn’t a shock after she pleaded guilty in court for paying £11,500 to administers for her daughter’s answers in exams to be marked correctly. The punishment for the crime was 250 hours of community service and she was forced to pay a $30,000 fine.

The Desperate Housewives set was dogged with rumours of in-fighting and bitchiness and in an open letter, Eva Longoria even revealed she dreaded the days she had to go to work.

Well, whilst we wait to see if Teri will return to the show, make sure you pop Sunday 12th April in your diary for the LIVE reunion on the Stars in the House website, it could be juicy!

‘Mindful sobriety’ is the booming wellness trend among millennials