With the Tokyo Olympics having come to a close before the Paralympic Games start in a couple weeks, it’s time to look back at some of our favorite medal-winning moments through the eyes of the Olympians’ family and friends. 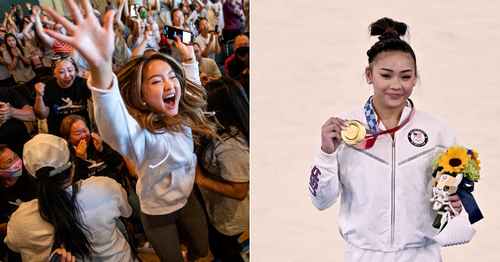 While they couldn’t be in Tokyo due to COVID-19 restrictions, family and friends still cheered to send love to their beloved Olympians in recorded videos we couldn’t stop watching. Whether they were high-diving, speeding on the track, or wrestling with opponents from the other side of the world, the athletes’ loved ones stood by any screen they could find to cheer on their loved one.

Ahead are 10 moments from athletes’ biggest fans around the globe that brought that thrilling sense of Olympic joy to our editors.

Leylah Fernandez and Emma Raducanu faced off in a teen-only US Open women’s singles final on the 20-year anniversary of 9/11. Canada’s Fernandez, 19, lost to 18-year-old Raducanu of Great Britain, but she fought until the very end of the intense and well-matched final.

During the trophy ceremony, Fernandez, eyes full of tears, said she was proud of everything she’s accomplished – she beat greats such as defending champion Naomi Osaka, world No. 5 Elina Svitolina, and world No. 2 Aryna Sabalenka. She also became the fourth-ever Canadian player to reach a Grand Slam final.

Before she passed it off to Raducanu, Fernandez wanted to address the crowd that supported her through every stage of the tournament. “I know on this day, it was especially hard for New York and everyone around the United States,” she stated. “I just want to say that I hope I can be as strong and as resilient as New York has been the past 20 years.” Watch that moving clip above.

We Ranked All of the Fab Coats From Inauguration Day, and It Was No Easy Task

As I watched history unfold on Inauguration Day, I was joined by many Americans in feeling hopeful, inspired, and excited for what’s to come. But in the midst of Joe Biden and Kamala Harris’s swearing in, their inspiring speeches, and inaugural poet Amanda Gorman’s beautiful reading, I – and people all over the Twitterverse – couldn’t help but notice how strong every attendee’s coat game was.

While I realize there were a lot more important things going on during Wednesday’s inauguration, I’d be remiss if I didn’t take a moment to appreciate the fabulous coats that were worn on this historic day.

From Kamala and Michelle Obama’s bold suits radiating elegance and power to the chic coats worn by Biden’s grandchildren, there was no shortage of spectacular outerwear. For this reason, we took a deep dive into the striking coats spotted on Inauguration Day and ranked some of the best. And trust me, this was no easy task. Ahead, see if your favorite coat made the list and prepare for major outfit envy.

Gavin Stacey fans – a sequel is officially occurin’, according to the BBC!