Rose McGowan made her first public statement since coming forward with allegations that Harvey Weinstein sexually assaulted her in 1997 this weekend at The Women’s Convention in Detroit, telling a crowd of 4,000 women, “I’m just like you.” 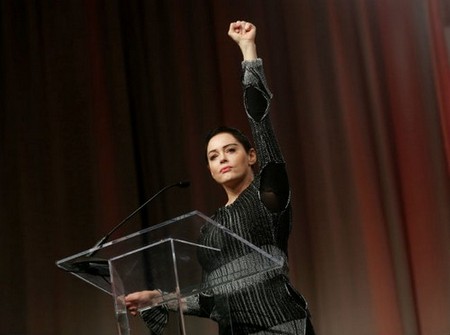 “I have been silenced for 20 years. I have been slut-shamed. I have been harassed. I’ve been maligned,” the actress, who was one of the first to speak out against Weinstein, revealed.

“What happened to me behind the scenes happens to all of us in this society. That cannot stand and will not stand. We are free. We are strong. We are one massive collective voice.”

“I want to thank you for being here, for giving me wings during this very difficult time. The triggering has been insane,” she continued. “The monster’s face everywhere, my nightmare. But I know I’m not alone because I’m just the same as the girl in the tiny little town who was raped by the football squad, and they have full dominance and control over the little town newspaper. There really is no actual difference. It’s the same situation, and that situation must end because it is not our shame. The scarlet letter is theirs. It is not ours. We are pure, we are strong, we are brave and we will fight. Pussies grab back. Women grab back. We speak, we yell, we march, we are here, we will not go away.”

You can read a full transcript of the speech here. McGowan also thanked Tarana Burke, the activist behind the “Me Too” movement, which was widely publicized by McGowan’s friend and Charmed co-star Alyssa Milano. The event was organized by the group behind The Women’s March on Washington, and also featured speeches by Congresswoman Maxine Waters, Senator Kristen Gillibrand, actress Piper Perabo, and EMILY’s List president Stephanie Schriok.

It was recently revealed that Weinstein attempted to pay McGowan $1 million to stay quiet just days before the New York Times article containing her allegations against him was published. Initially, McGowan countered, asking for $6 million, but quickly instructed her lawyer to withdraw the offer.

“I had all these people I’m paying telling me to take it so that I could fund my art,” she told the Times in a story published this weekend. “I figured I could probably have gotten him up to three. But I was like – ew, gross, you’re disgusting, I don’t want your money, that would make me feel disgusting.”

Michelle Obama’s Message to Men: “Get Some Friends” and “Go Talk to Each Other”