Mary Poppins is back with the greatest comeback since Britney Spears in 2005 and she’s sassier than ever. Returning umbrella and all, Mary is joined by Jack the Lamp Lighter – sorry Bert, babes – and the two Banks children, Michael and Jane are all grown up. But this is a sequel like no other, with more toe-tapping tracks and Meryl Streep, no less. Fab-u-lous!

[embedded content]
Here GLAMOUR’s Joshington Hosts is joined by the cast of Disney’s most eagerly anticipated sequel – ever – Hamilton creator Lin-Manuel Miranda (Jack), Ben Whishaw (Michael Banks) and Emily Mortimer (Jane Banks) for a game of ‘Be More Mary’ where the cast get their best agony aunts ON and help solve some supercalifragilisticexpialidocious inspired problems… All aboard, guvnor!

Ben Whishaw: Can I warn you warn you against this? I would say don’t try! I think just drop this one – just give him a little tap on the bottom with your umbrella!

Lin Manuel Miranda: I wasn’t listening to contemporary hip-hop to prepare for this movie, I was listening to Music Hall songs from the 1930s. (Watch the video above to see Lin’s amazing cockney rap!) 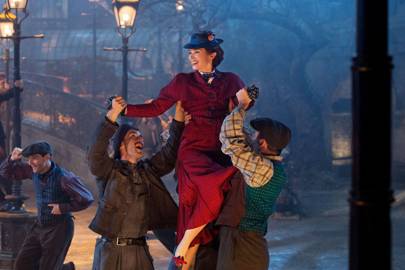 I am about to hit the Christmas party – how can I bring the Mary Poppins spirit to my dance moves?

Lin: Get a good lamp post and swing as hard as you can!

Ben: They do that great dance move with Meryl Streep’s character, Topsy, where they bring their knees together – but on the ceiling. If you can do it on the ceiling too, that would be REALLY good! It would get all the likes on Instagram.

My beauty and wardrobe routine have become run of the mill, what top tips can you give me for ensuring I look spit-spot and practically perfect in every single way?

Ben: I am feeling a bit depressed about my own finger nails as I don’t – I mean – I do clean them! But I think you should just zhoosh it up, babe! Buy yourself a nice new outfit!

Mary Poppins is a bit of a flirt in the sequel – what are your top tops for flirting with Mary?

Lin: You should probably ask Dick Van Dyke as he was a lot more flirtatious with her than Jack. What is Jolly Holiday but one long flirt between Mary and Bert?!

I am running low on self-esteem, like Jack, how can I relight my fire?

Emily: Tequila! No actually, dancing – copy a dance move from Mary Poppins Returns, that will help!

WATCH: Emily Blunt in Mary Poppins Returns is super… (you know the rest!)

8 Signs It’s Time to Break Up With Your Friends