Just when you thought you heard it all, Chris Pratt revealed he’s a massive fan of Gemma Collins. So much so, he told GLAMOUR UK, “I love the GC. I would be a little starstruck if I met Gemma.”

Sitting down with GLAMOUR’s Josh Smith and his Lego Movie 2 co-star, Elizabeth Banks, Chris confirmed his obsession with the cornerstone of British Reality TV, TOWIE. “I got hooked on is when I was filming here a couple of years back, it’s so cool,” he said.

But has he been keeping up with THE Dancing On Ice drama that has enraptured a nation and created a thousand new, invaluable Gemma Collins memes?

After being told of the news that Gemma had a nasty fall on national television last week, Chris, looking genuinely and visibly distressed, exclaimed: “Oh no! Is she hurt? Is she ok?”

Cutting the cutest puppy dog face and using his best Essex accent, he had a message for the injured Gemma Collins, “Gemma, darling, I am sorry to hear that!”

Chris Pratt was talking to GLAMOUR as part of a Lego challenge, where himself and his co-star, Elizabeth, had to create a portrait of the other using only Lego. The results are a touch more Picasso than David Hockney.

Watch the full video above where the Lego Movie 2 stars reveal their best, and hilarious, impressions of stepping on Lego and if that wasn’t enough, Chris also reveals his greatest beauty mistake. 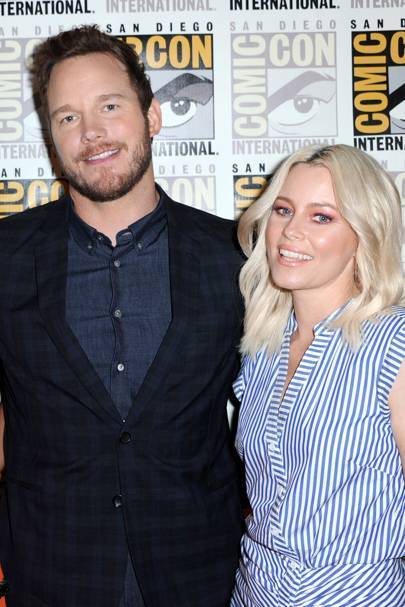 Prepare yourself for this one: “When I first started out I tried to do my own makeup and I usedmascara on my eyebrows. I even used it to colour my beard!” A niche look, which we would not recommend you trying at home, lads.