Caregivers have long used music for dementia therapy as it’s been shown to relieve stress and uplift the moods of people with neurodegenerative diseases such as Alzheimer’s – see a list of their favorite songs below.

Playing a wartime classic such as You Are My Sunshine alleviate Alzheimer‘s symptoms, new research suggests.

A new study from the University of Utah Health found that listening to their favorite music triggered a surge of activity in several areas of a patient’s brain including the social and sensory hubs that were previously quiet.

The findings revealed that putting on an old record could provide significant relief from the debilitating effects of Alzheimer’s including anxiety, depression and agitation. 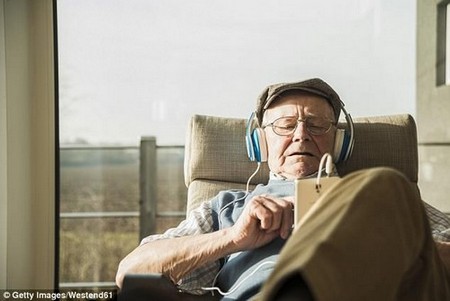 Listening to one’s favorite music triggered a surge of activity in several areas of a dementia patient’s brain, alleviating symptoms such as anxiety and agitation, new research has found

An estimated six million people in the US suffer from dementia, an umbrella term for a group of symptoms including memory impairment, confusion and loss of ability to carry out everyday activities.

Alzheimer’s and other forms of dementia cause rapid deterioration in the brain, often eliminating a person’s ability to recognize their families or remember events from their life.

However, music memory somehow escapes the damage, allowing patients to remember songs that are meaningful to them even when most of their other memory is gone.

‘When you put headphones on dementia patients and play familiar music, they come alive,’ said Jace King, a graduate student in the Brain Network Lab and first author on the paper published Friday.

‘Music is like an anchor, grounding the patient back in reality.’

In the new study, the researchers hypothesized that the positive effect of music is linked to the brain’s salience network.

The salience network is thought to be integral to cognitive functioning by regulating activity in other areas of the brain including the visual, emotional and social networks.

Previous research has shown that damage to the salience network results in an decrease in communication between different areas of the brain, similar to that seen in dementia patients.

SAMPLE PLAYLIST FOR YOUR LOVED ONE WITH DEMENTIA

While dementia takes its toll on a person’s memory, music stays with them.

Below are 15 of the top recommended songs from caregivers and senior living programs.

Source: A Place For Mom

‘People with dementia are confronted by a world that is unfamiliar to them, which causes disorientation and anxiety,’ said Dr Jeff Anderson, an associate professor in Radiology at U of U Health and contributing author on the study.

‘We believe music will tap into the salience network of the brain that is still relatively functioning.’

Over the course of three weeks the researchers trained 17 participants with an average age of 71 years old to use a portable media player and helped them create a playlist with their favorite songs.

Using a functional MRI, the researchers scanned the patients to image the regions of the brain that lit up when they listened to eight 20-second clips of from their personalized music collection, eight clips of the same music played in reverse and eight blocks of silence.

The scans revealed that music activated several different areas of the brain including the visual network, the salience network, the executive network and the cerebellar and corticocerebellar network pairs.

‘This is objective evidence from brain imaging that shows personally meaningful music is an alternative route for communicating with patients who have Alzheimer’s disease,’ said Dr Norman Foster, director of the Center for Alzheimer’s Care at U of U Health and senior author on the paper.

‘Language and visual memory pathways are damaged early as the disease progresses, but personalized music programs can activate the brain, especially for patients who are losing contact with their environment.’

The authors emphasized that while promising, the results are far from conclusive in part because the sample was small and because they only did one round of imaging for each person.

They did not determine how long the music’s effects lasted in the brain or whether it made any impact in the long term.

However, they were ultimately encouraged by the results.

‘In our society, the diagnoses of dementia are snowballing and are taxing resources to the max,’ Anderson said.

‘No one says playing music will be a cure for Alzheimer’s disease, but it might make the symptoms more manageable, decrease the cost of care and improve a patient’s quality of life.’