“There are a lot of parallels between the two because lashes are hair,” CEO of Drybar Alli Webb told POPSUGAR. That’s why the two designed a formula and brush in tandem with the most-requested style at the salon: volume.

King Kong and Ann. Pizza and pineapple. Socks and sandals. Clearly, stranger things have come together than a makeup company and blow-dry bar franchise. Still, with what might appear to be an odd match, the founders behind IT Cosmetics and Drybar insist the collaboration – a first for both brands; a called Lash Blowout hitting QVC July 26, ITCosmetics.com July 31, plus Sephora and Ulta August 1 – makes perfect sense.

Another thing everybody after volume also probably knows: the best results are all in the details. That’s where IT Cosmetics did its due diligence: “We wanted to capture the best of Drybar technology, so the mascara is loaded with a lot of the same ingredients you’d find in some of their hair products, like biotin and collagen,” said founder Jamie Kern Lima.

Oh, and the tube itself doesn’t just look like a spitting image of a Drybar hairbrush, but the bristles also have “little yellow balls on the tips,” said Lima, like its Lemon Drop Detangler Brush. (Those make it easy to rake through knots – er, clumps.) 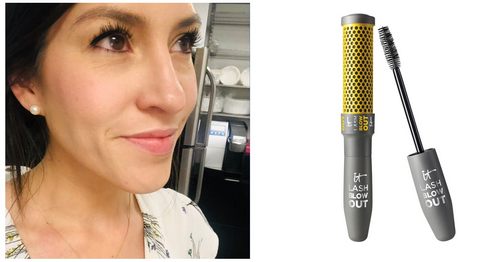 Now, as someone who looks like a turtle without its shell sans mascara (and I say that lovingly, knowingly, with zero shame – promise), I’ve got some pretty strict standards when it comes. The false-lash effect, for me, is akin to putting on a fresh pair of underwear in the morning – like I’m ready to take on the world – and the more fanlike, the better. The only problem is most mascaras on the market either clump after I apply my (admittedly excessive) 200 coats or leave me looking like Courtney Love circa 1992 by lunchtime. There is little in-between.

So, the inevitable question: did Lima and Webb get it right with the IT Cosmetics Lash Blowout Mascara? Did it live up to its claims? Let’s just say: they definitely didn’t blow it.

This £3.99 rose face oil from Aldi has so many great reviews

This £10.99 mascara is honestly as good as a lash lift