The camper and RV industry has experienced non-stop growth in the United States recently, with eight consecutive years of increasing sales. The fastest-growing sector of the market? Camper vans.

But despite new, trendy vans – also known as Class Bs – from big-time producers like Winnebago and Airstream, many of the most innovative and interesting vans aren’t sold in the U.S. Much to the frustration of camper enthusiasts stateside, you’ll have to go to Europe to find campers like the Volkswagen California van.

The auspicious history of the VW camper van begin in the late 1940s, although the first “Splitty” bus wasn’t introduced to the U.S. market until the mid-1950s. Over the next few decades, the VW bus became an icon of American culture, with millions of Transporters, Bays, and Syncros hauling everyone from hippies and musicians to hardcore camping families.

Many of us grew up camping in a VW bus, sparking both a love of the outdoors and a latent affinity toward life on the road. But due to changing markets, the growing popularity of SUVs, and new safety regulations, the last VW van sold in the U.S. was in 2003. Since then, we’ve had to covet Eurovans from afar or track down pricey vintage Vanagons that can be hard to maintain. 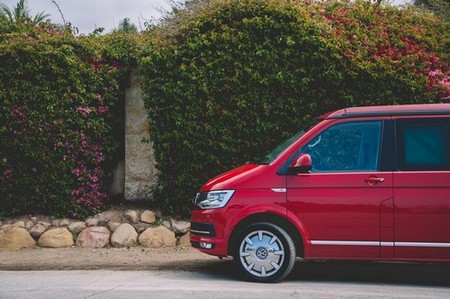 When not in camping mode, the California’s low profile makes it a stealth daily driver.

In honor of the 30th anniversary of the first Westfalia-built California camper van – which ironically has never been sold in California – Volkswagen brought over a dozen California T6 AWD vans to the United States for a good old-fashioned road trip. I was one of the journalists invited to participate in the trip, which included three days of driving and two nights of camping near Los Angeles.

The latest California van captures all of the common-sense amenities so prized in earlier models while delivering loads of modern convenience. A turbocharged 2.0-liter engine and the 4Motion all-wheel drive system mean that the T6 handles well on everything from eight-lane highways to dirt roads. But for this camper addict, it was the inside that impressed.

Simply put, the camper is a dream for families. A motorized pop-top bed space allows two adults to sleep up above, and the bench seat down below turns into an additional sleeping space perfect for kids. When you’re not sleeping, a table pulls out from the galley kitchen, where you’ll also find a two-burner gas stovetop, small kitchen sink, and top-accessed refrigerator. Both front captain’s chairs swivel to make a four-person dining area, and an LCD panel manages all of your battery, water, and heat systems.

With those features alone, the California would be on par with many of the smaller Class Bs available here in the U.S., or certainly comparable to the more basic custom builds coming out of conversion companies like Sportsmobile. But what set my heart racing was the smartly designed and innovative storage features and amenities that we’ve come to expect from Volkswagen.

Everywhere I turned in the van there was something extra, a small, well-planned detail that points to the company’s extensive experience building campers. A net inconspicuously hanging from the pop-top area allows people in the upper loft an easy place to store a water bottle, book, or chapstick without infringing upon sleeping space. A removable LED light located behind the front passenger seat illuminates the floor area and serves as a working flashlight for late-night trips to the port-a-potty. Handy cup holders and towel racks can be moved into different positions, and even the dining room table can be used in the middle of the van or over the bench seat to increase counter space. 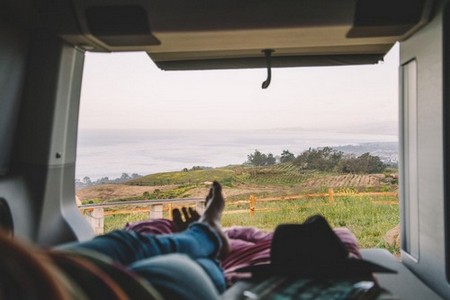 A stereotypical #VanLife view of the California coast near the iconic Rincon surf spot.

But it doesn’t stop there. Two camping chairs nest perfectly into the van’s rear cargo door, so well hidden I had no idea they were there until a VW rep showed me. Likewise, the sliding side-panel door hides another, much larger camping table that can be used inside or out. Storage drawers underneath the bench seat are standard, but a corner unit – similar to older models of the VW bus – features a door with a lighted interior mirror and a removable bar for hanging dress clothes.

Of course, the van wasn’t perfect. Some of the interior components seemed like they would need reinforcement with continued use – the roller shutters on the storage units didn’t always roll quite so smoothly, and I had a hard time converting the bench seat into a flat bed at night. I would prefer higher ground clearance, and some people will bemoan the lack of a toilet. But these small pet peeves aside, the VW California is smartly engineered, a ton of fun to drive, and comfortable to sleep in. 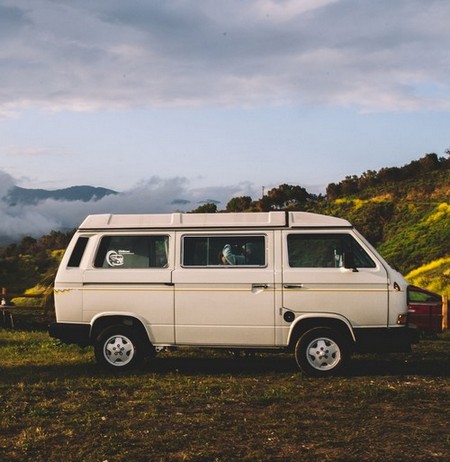 The original California camper van from Volkswagen debuted in 1988.

Which begs the question: Why in the world isn’t the camper sold here? Over the years, Volkswagen has said that it just doesn’t think there’s a market in the U.S. for an expensive, small camper van like there is in Europe. Americans love big SUVs and big RVs and big everything else. A van like the California would likely be too pricey for average consumers and cost too much to make for it to be profitable.

That could have been true five years ago, but I believe that we’re living in a different, more van-obsessed world now. It’s true that the van I drove around Santa Barbara and Ojai would be considered expensive here in the U.S. The most basic California starts at around $51,000, and the fully loaded version I tested would be closer to $80,000 using a direct currency conversion from euro to dollar. Throw in a pessimistic assessment of import costs and you’re looking at a van that might cost over $100,000 in the U.S.

That’s a lot of cash, to be sure, but I don’t know that it means that the California camper wouldn’t be competitive stateside. The Winnebago Revel uses the more expensive 4×4 Sprinter as its base and starts at $134,799; the “affordable” Hymer Aktiv has a list price of $92,814; and the Airstream Interstate will cost you a whopping $165,878. Those numbers don’t even compare to how pricey custom builds can be, with companies like Outside Van selling luxury adventure rigs for $240,000. 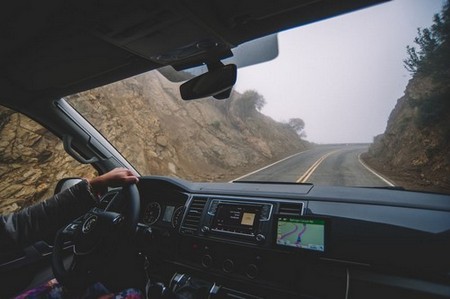 Driving the van through the windy and cloud-covered hills of the Los Padres National Forest.

We get it, Volkswagen is a much larger company and it needs to guarantee a certain amount of demand to invest in the U.S. market. But with #VanLife booming and over 504,599 new RVs and campers shipped in the U.S. in 2017 alone – the number was just 285,749 in 2012 – now is the time for Volkswagen to once again become an icon of the American van world.

In so many ways, the California T6 AWD is the type of camper we need. It can function both as a daily driver and as a weekend getaway, even for people living in dense urban areas. It sleeps a family of four but doesn’t require you to have an oversized garage or risk angering your neighbors with a giant RV since it’s under 7 feet tall. It gives you everything you love about #VanLife without the irritations of a large trailer or camper. It just might be the perfect camper for well-off millennials who want to get outside, but prefer city life, and therefore don’t have the time or space for larger DIY builds. 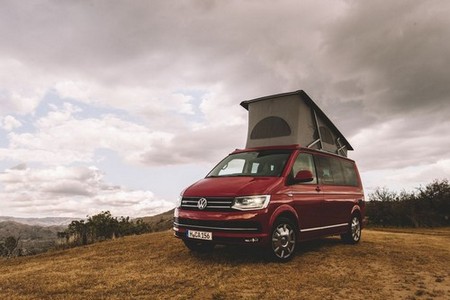 If Volkswagen priced the California van competitively and capitalized on its dedicated brand following, it could find a tailor-made group of obsessives in the U.S. ready to throw down on a versatile, functional, and yes, expensive camper. If the California van is really doomed to never sell in California, we’ll have to settle for the forthcoming (and pop-top free!) I.D. Buzz, an all-electric minibus set to debut in North America in 2022.

Whether Volkswagen decides to bring the California stateside or not, U.S. RV and camper manufacturers could take a few lessons from the European vans on the market. As the surge in popularity in smaller campers, trailers, and Class B vans proves, today’s class of American RV buyers don’t always adhere to the “bigger is better” mantra. Smart engineering; modular, well-thought-out design; and modest sizes can, and do, trump a 45-foot diesel pusher for most buyers.

We’re tired of coveting some of the most innovative and functional campers from afar. Let’s hope Volkswagen – and its competitors – take note. 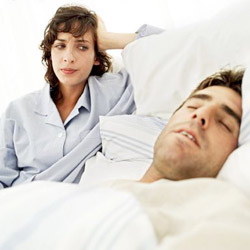 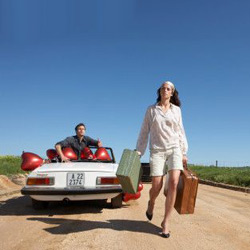 Allow me to take my leave