Here, Rita opens up about her journey from refugee to Princess of Pop, the advice that has shaped her and why sometimes, ‘you just need to be that bitch,’….

Rita Ora certainly has a very full CV. Not only has she produced banger after banger from R.I.P to Your Song and collaborated with the likes of Avicii, she’s also found the time to judge X Factor and even shape herself into a fashion icon in the making.

Now, following collaborations with the likes of Adidas and DKNY, the twenty-eight-year-old singer has teamed up with Thomas Sabo for a bold and colourful jewellery range – much like the spirit of the woman herself. 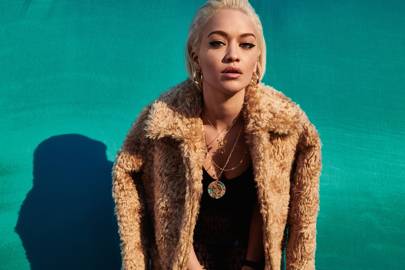 What’s been the most inspiring piece of advice that’s shaped your life?

But that’s only because it’s you and you have to remember that probably not everyone even knows what they are talking about.’ You have to keep that in mind because you being in it, you’re like, ‘oh god the whole world thinks whatever,’ so I’ve learnt to take things into pinches of salt. That has taken a lot of trial and error but taking things with a pinch of salt is probably the best advice I ever got.

There is so much negativity online – have you ever let that get to you?

It’s really crazy. The cyber bullying is next level. It’s intense. But what got me through is the confidence I have with what I do. That really makes me want to get up in the morning and do something else because I’m so happy to be able to do what I love. A lot of people don’t have that, so I don’t take it for granted and I try use it in a good way.

Your journey back to Kosovo – where you are from – with UNICEF was a very emotional watch. What was the hardest thing about that?

It was a big moment for me as a person and in my career. Out of everything I’ve done so far, that was a really stand out moment for me because I’m from that place in the world and so it touched a really sensitive spot for me knowing that sort of poverty exists two hours away from the UK. It was a lot of mixed emotions but at the same time seeing the effect charities do have.

Sometimes you see things and you’re like, ‘oh you never see the outcome of these charities.’ A lot of people are like, ‘what does it actually do?’ But this was the first time, hence why I wanted to be an ambassador of UNICEF, that I actually saw results. It was the first time they went to the place the person was from so everyone was a bit emotional. I think you can tell in the video.

Were you doing it for that little girl that left Kosovo?

I was doing it for her and also, I have family members who still live in Kosovo. There was a lot of reasons why I was doing what I was doing.

Was there a moment you realised you had this incredible platform and it was such an important thing to do?

You know you have influence when you have high profile, like myself, but you don’t realise the effect you have verbally until you see it in real life. To be able to raise as much money as we did, it was like, ‘wow it worked.’ I felt a bit like a superhero because the cape was really strong this time!

You seem more empowered than ever before…

Yeah, it’s been a journey. But I’m not even close to where I want to be. I have so much more to do but I feel more empowered every day because some days I don’t wake up like, ‘I’m a boss bitch,’ and then sometimes I wake up like, ‘oh man!’ I think this come in phases and you’ve just got to be prepared for it. Even with what I do, I’m still human so you’ve got to be like I need to keep this going for the fans. 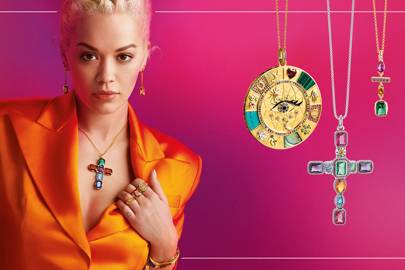 Is there such a thing as too much, in the world of Rita Ora?

Never, not for me! But maybe that’s why some people look at me like, ‘what the hell does she wear?!’

You have definitely been a style chameleon…

I did it all. I cut all my hair off, I shaved it, I used to have no hair. I get bored easily. If you can’t tell with my music and the fact, I haven’t taken a step back in ten years that just goes to show that I’m so obsessed with my work. I love playing with my clothes and express myself creatively. It’s the best job ever.

How do you use jewelry and fashion to empower you?

As I’m getting older, it’s changing for me. When I first started in this job, I was like, ‘I love everything!’ Now I’m getting a bit older, I’m starting to understand picking things and saying no to things. I feel more empowered knowing I can make a choice with what I do, not just in my life but with my clothes. If I want to wear hot pants and a bra, if I want to wear a floor length gown, I will! Times are changing and as an artist, it’s part of our jobs to be ourselves because we’re supposed to inspire and admire.

The new show from the people behind Love Island sounds epic